Duterte on US: Friendly to them now 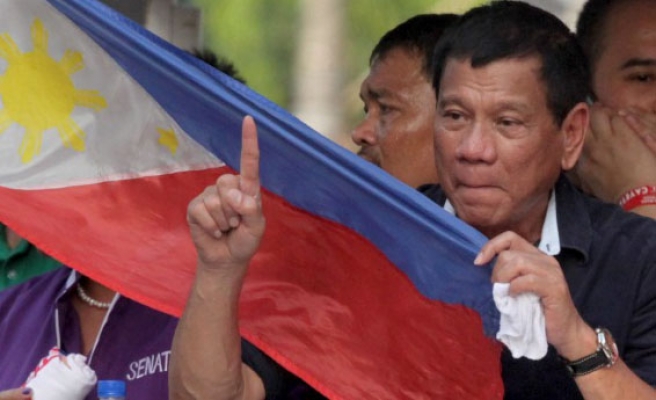 President Rodrigo Duterte was advised by the Department of Foreign Affairs (DFA) to temper his language and avoid cursing the United States, he said on Thursday.

"I would rather be friendly with them now with the US because the Americans have redeemed themselves and have helped us a lot," Duterte said at an event in Eastern Samar, Luzon, to commemorate the 116th Balangiga Encounter Day.

"There are so many factors involved but I'd rather be friendly to them now because aside from these episodes of, I said, sad incidents, overall the Americans also redeemed themselves a lot," he said.

According to GMA News, the President specifically mentioned the assistance given by the US to Filipino soldiers throughout the years, starting from  World War II.

Duterte also said the US government's efforts to return the Balangiga bells to the Philippines influenced his change of attitude toward them.

Historically, Balangiga is the site of a siege that led to the US military's worst single defeat in the Philippines. In what is known as the Balangiga Massacre, locals outsmarted and killed 48 out of 74 US troops in 1901. The siege was signaled by the Balangiga bells, which the US eventually took as spoils of war.

"I was under advice that the negotiations are going on, that the government of America is looking for ways how to get out of this problem of the Balangiga bells because it remains to be not only the source of irritation but the source of a painful reaction, what really happened to our countrymen," he was quoted saying.

He admitted he was emotional when he delivered an impassioned remark during his last State of the Nation Address about the bells that were seized by the US Army as war booty in Balangiga, Eastern Samar.

Duterte, meanwhile, explained that the US partly helped" the Philippines when it was challenged by the Japanese occupation" during World War II.

"I would not say they were our saviors, but they are our allies and they helped us," Duterte said adding that "Even today, they provide crucial equipment to our soldiers in Marawi to fight the terrorists."

Duterte described previous US abuses as "water under the bridge."

During Barrack Obama's presidency, Duterte repeteadly blasted the US atrocities such as the killing of 600 Moro people by American soldiers in Bud Dahu, Sulu in 1906 and the US has not even apologized to the Philippines for the massacre.

He cursed oftenly Obama for the criticism of the mounting death toll in the Philippines’ war on drugs and even declared that he was breaking the country's' long-standing military and economic alliance with the US.

Duterte's sudden change of his rhetoric against the US comes as Foreign Affairs Secretary Alan Peter Cayetano met with U.S. State Secretary Rex Tillerson and key congressional leaders in Washinton on Wednesday and pledged to continue working closely together on issues of mutual interest and concern.

According to Rappler, Cayetano said bilateral ties between the Philippines and US have normalized after the strain caused by criticism of President Duterte's brutal drug war and his decision to pivot towards China.

The Philippine Embassy in Washington said  Secretaries Tillerson and Cayetano reaffirmed the importance of the partnership and alliance between both countries, which it said Secretary Tillerson noted is "on an upward vector."

"Secretary Tillerson and I discussed a broad range of bilateral issues, including our ongoing campaign against criminality, terrorism and illegal drugs,"  Cayetano said in a statement posted on DFA official website.

Cayetano said he informed Tillerson that Manila would welcome further cooperation with Washington, especially on initiatives that would address the illegal drugs problem in the country.

He also discussed with Tillerson the openness of the Philippines to receive independent observers or investigators who could take a closer look into not only the illegal drug problem but also the government's campaign to eradicate it.

"We made it clear that we have nothing to hide and that we are ready to work with experts or observers as long as they are independent and fair," he said.

"We would welcome experts if they can assure us they would not politicize the investigations because we want to make sure the outcome would be credible."

Cayetano reiterated the seriousness of the illegal drug problem in the Philippines.

The Secretary also clarified to Tillerson that contrary to media reports, the Philippines does not have a state policy allowing extra-judicial killings, especially of illegal drug suspects.

Earlier this month, the US announced it was donating P730 million ($15 million) to help rebuild Marawi.

Also recently, the Philippines and the US held a drill that simulated a hijacking and hostage-taking incident to train their troops in fighting terrorism.