Philippine president said he would lift military rule in Mindanao once Marawi has been cleared, improvised explosive devices 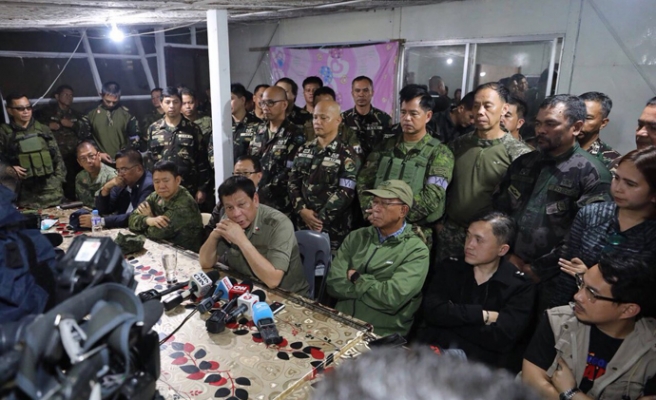 President Rodrigo Duterte on Thursday visited the war-torn Marawi City as protesters mounted mass actions in different parts of the country to object to his bloody drug war and alleged authoritarian rule.
There, government troops have battled with the combined forces of the ISIL-linked Maute and Abu Sayyaf groups for more than 120 days. The president made his fifth visit to the Islamic city even as thousands of both his supporters and critics gathered to “call against all excesses and shortcomings of the government” on the “National Day of Protest” – as Duterte declared it earlier.
Accompanied by Defense Secretary Delfin Lorenzana and military chief Eduardo Año during his visit, Duterte said he would lift the military rule in Mindanao, which he imposed on May 23, following the clashes, once Marawi has been cleared, especially of improvised explosive devices.
"It will be lifted anytime after things are all ready.
There’s a clean up. It doesn't end with the physcial fighting. There's much to be done - getting rid of the remaining explosives which are planted along the way," Duterte was quoted by Rappler, a Philippine-based online news portal as saying. As the government’s claim to victory is nearing, Duterte laid down the steps that the government intends to undertake once the crisis is over, however, he insisted that there will be no victory celebration. "I do not want any celebration of victory.
We are all losers here… Rebels dead, soldiers dead – breaks our hearts because they are all Filipinos,” said Duterte. "Let us just pray to God. I hope Allah remembers the people of Marawi.” He also disclosed that part of the government’s investigations is the militant’s source of funds.
“The military is under orders to clean the place. Before we leave, every gun and every shabu inside the house will be taken out and the owners prosecuted. Explain to me why you have so many guns, and explain why you have shabu (methamphetamine), or why you have a lot of money," said Duterte.
The crisis in Marawi erupted when the militant groups launched an attack to the city allegedly to establish an Islamic caliphate in the region. It has caused a humanitarian crisis displacing more than 200,000 residents and has seen more than 800 deaths, mostly militants.
Last Mod: 22 Eylül 2017, 10:11
Add Comment