Hopes of de-escalation evaporated on Saturday with Ukraine's representative and separatist envoys accusing the other of sabotaging negotiations. 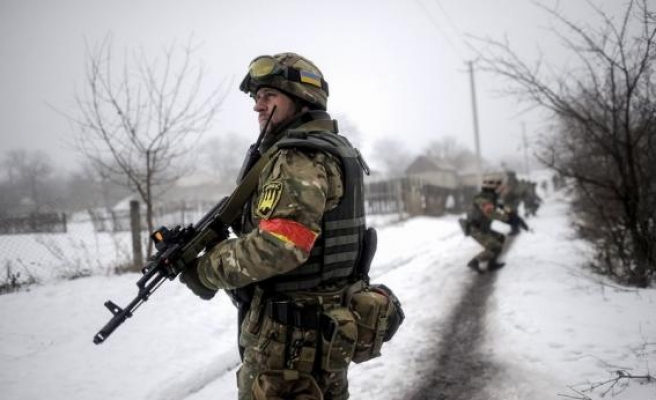 Thirteen Ukrainian soldiers and at least seven civilians have been killed in fighting in the past 24 hours, Kiev authorities said on Sunday, reporting widespread clashes with Russian-backed separatists a day after peace talks collapsed.

"Fighting continues across all sections of the frontline," Kiev military spokesman Volodymyr Polyovy said in a briefing.

The civilian and military death toll has mounted in the past two weeks after rebels launched a new offensive. Hopes of de-escalation evaporated on Saturday with Ukraine's representative and separatist envoys accusing the other of sabotaging negotiations.

Clashes are intense around the town of Debaltseve, he said, referring to a Kiev-held transport hub connecting the two main rebel strongholds that separatists aim to cut off.

"There is no question of encirclement or cutting off of the main communication lines...the situation is under control," he said.

The Interior Ministry said on Sunday a further seven civilians had been killed in shelling on Sunday of the town, which has been cut off from power and water supplies for days.

In rebel-held Donetsk, a Reuters witness saw the body of a young man stretched out on a street in the city centre, killed when a shell struck a wall nearby.

Nadezhda Petrovna, 68, a neighbour, said the man was trying to run away from the attack when a shell landed in front of him.

"It is like this every day, people are getting killed, we are sleeping fully dressed so we can run into the cellar, this is becoming unbearable," she said.

Ukraine, Russia and separatist envoys met for peace talks under the auspices of the Organization for Security and Cooperation in Europe in Minsk, Belarus, on Saturday.

But the talks ended without any agreement for a new ceasefire and with Ukrainian and separatists reproaching each other for undermining the talks.