Eight people, including six fighters have been killed and eight people have been wounded in two separate attacks in Indian-held Kashmir. 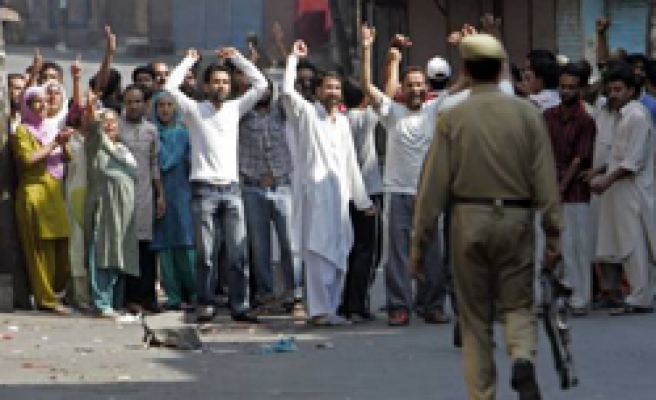 Eight people, including six fighters were killed and eight people were wounded in two separate attacks in Indian-held Kashmir on Wednesday.

In the first incident, six suspected fighters and an Indian soldier were killed in an overnight gunbattle in Indian held-Kashmir’s Kupwara district, the Indian army said.

"Three militants were killed last night and three were killed today. One of our officers was also killed and another one is injured,” a senior Army official told The Anadolu Agency.

Indian army said the fighters had infiltrated from the Pakistani side into the Naugam sector near the Line of Control, a military line between the Indian and Pakistani-controlled parts of Jammu and Kashmir.

The army said it was carrying out a search operation to sniff out more suspects in the area.

In the second incident, an Indian police officer was killed and seven people, including four police personnel and three civilians were wounded in a grenade attack in southern Indian-held Kashmir’s Pulwama district, police said.

Authorities said the attack took place when police were patrolling in the district’s Pahoo village.

Southern Indian-held Kashmir has seen an increase in violence against pro-Indian political workers since the last one month. A village headman belonging to a ruling political party was shot dead by unidentified gunmen on Nov. 30 and another village headman was shot at on Dec. 1 in the area.

Elections are currently underway in Indian-held Kashmir to form a local government under the Indian constitution that is opposed by the resistance leadership of the disputed valley.

Indian authorities have incarcerated hundreds of pro-independence activists and leadership of Kashmiri resistance to Indian rule since last month. While leaders of the resistance demand plebiscite under international observers, Indian authorities continue to hold elections in the area under the Indian constitution.

Since 1989, Kashmiri resistance groups in Indian-held Kashmir have been fighting against Indian rule for independence, or for unification with neighboring Pakistan.