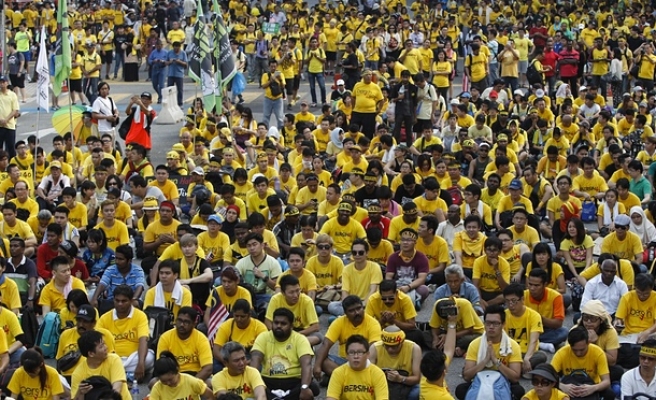 Former Malaysian leader Mahathir Mohamad called for the current prime minister to be ousted in a speech to tens of thousands of people, who have gathered for a second day of a rally demanding institutional reforms and the ouster of Prime Minister Najib Razak.

"The only way for the people to get back to the old system is for them to remove this prime minister," Mahathir told media before going to the protests in downtown Kuala Lumpur.

"And to remove him, the people must show people's power. The people as a whole do not want this kind of corrupt leader."

There are around 40,000 protesters gathered around Independence Square, where Malaysia will celebrate its 58th Independence Day on Monday, carrying banners accusing Razak of corruption and cronyism.

According to Bersih (“clean” in Malay), the electoral reform group that organized the weekend rally, some 200,000 people were estimated to have joined at its peak at around 4 p.m. (0800GMT) Saturday.

Wong Sai Long, a Bersih secretariat official, said on Sunday that they again expected the rally to be joined by tens of thousands of participants.

Following the peak of Saturday’s protest, crowds wearing yellow T-shirts -- which the government had banned Friday along with Bersih's logo, after blocking access to the group's website -- slowly dispersed after 6 p.m. as people headed to their homes and hotels.

As midnight approached, around 15,000 protesters remained at Independence Square and volunteers and Bersih officials were seen tearing boxes and pieces of cardboard to create temporary sleeping pads for the participants.

A sea of yellow made up of protesters chanting “bersih” gathered Sunday at the historic Jamek Mosque, where two trucks have been set up as makeshift stages for leaders to give speeches.

At the scenic historic square of Medan Pasar (literally meaning “Old Market”) a few miles away, the rally had a festive air as people dressed as clowns and other on stilts voiced the demands of the protesters.

Members of a non-governmental organization also collected signatures for a protest against Razak and the ruling Barisan Nasional government.

Meanwhile, Home Minister Ahmad Zahid Hamidi, has warned Bersih leaders of possible actions against them as police monitor them and their speeches during the rallies across the country.

According to The Star Online, Hamidi -- who also serves as deputy prime minister -- said that actions would be taken against the organizers of the "illegal gathering".

"The organizers must be daring to face the consequence of his or her actions. Then don't accuse the police of cruelty for the action," he stressed. "This is not a warning and not just a promise, action must be taken."

He underlined that while there had not been any arrests so far, that did not mean the police and the Kuala Lumpur City Hall officers have not been fulfilling their duties.

Many Malaysians from all walks of life are demanding the resignation of Razak over allegations of graft and financial mismanagement at debt-laden state fund 1Malaysia Development Bhd (1MDB), and a multi-million-dollar donation made into his personal account.

1MDB is 42 billion Ringgit ($11 billion) in debt, and Razak is chair of its advisory board.

Kuala Lumpur's police chief, Comm. Md Tajuddin Md Isa, has warned that any violence during the march would "be dealt with sternly".