A heavily armed former policeman, holding a group of mostly foreign tourists on a bus in central Manila, is cooperating with authorities, a police spokesman said. 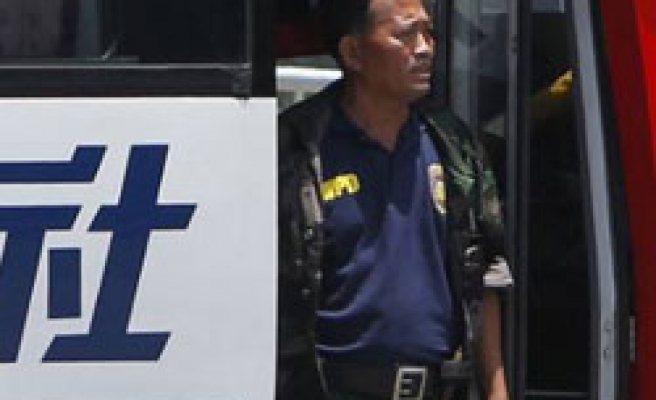 A disgruntled ex-policeman armed with an automatic rifle was holding 18 people, including tourists from Hong Kong, hostage on a bus in downtown Manila on Monday, demanding his reinstatement to the force.

Two negotiators had approached the bus and spoken to the gunman, identified by police as Rolando Mendoza. He gave the negotiators a list of demands, local television reported.

A handwritten note in bold letters talking of a "big deal" after 3 p.m. (0700 GMT) was posted on the glass door of a tourist bus where a heavily armed former policeman is holding mostly foreigners hostages in central Manila, television images showed on Monday.

Mendoza, armed with a M-16 rifle and small arms, had released seven hostages: a man, three women and three children, police said. He asked for food for the remaining 18 on the bus, which was delivered, and fuel to keep the air-conditioning going.

A Manila police spokesman said Mendoza was cooperating with the authorities and that the use of force would be a last resort.

"They are all safe, no untoward incident has been reported," Manila Vice Mayor Isko Moreno told radio station DZMM of the tourists on the bus.

Police had established a landline connection with the bus, which was stopped across the eight-lane park road in front of the Quirino grandstand, where President Benigno Aquino III had taken his oath of office on June 30. Metro Manila police chief Leocadio Santiago said the gunman was a former police officer who had been dismissed from the force, and was demanding reinstatement.

The road was cordoned off, with the bus isolated inside the park. Nearby construction work was halted. A sizeable crowd has gathered. Several ambulances and a fire engine were on standby about 500 metres away, behind the police line.

Hong Kong's Secretary for Security Ambrose Lee told reporters authorities were very concerned about the incident. Two officials were being sent to Manila and a hotline was being set up in Hong Kong for families of the hostages.

"The information we've received so far is that no one is injured," Lee said in Hong Kong.

He said he hoped the incident would be peaceful resolved and the hostages were released "safely and as quickly as possible."