Execution of Bali 9 duo in Indonesia may be delayed 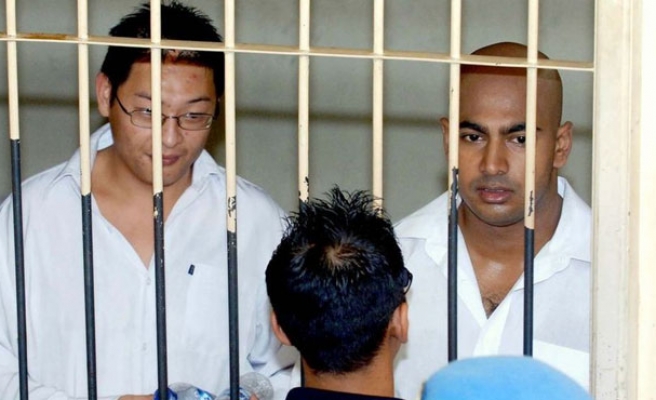 Two Australians on death row received a sign of a slight reprieve Tuesday with the Indonesian government saying it may delay execution while it focuses on a simmering conflict between the country's two law enforcement agencies.

The execution of eight drug traffickers - among them Australians Andrew Chan and Myuran Sukumaran - was due to take place this month, but Indonesian Minister of Justice and Human Rights Yasonna H Laoly suggested Tuesday that it could be postponed.

"I think it [the execution] will be in the near future, but it must be considered that there is a current condition between the Indonesian police and anti-graft commission that requires energy to think about," Laoly said, according to the Kompas.com news website.

"I think there will be a slight delay," he added. "We will concentrate on the [law enforcement agency] problem. We solve [problems] one by one."

Laoly assured reporters, however, that the government would not change its plan to apply the death penalty as clemency had been rejected by president Joko "Jokowi" Widodo.

The order is already in place, but there is no certainty of the time, he added.

Indonesia's Corruption Eradication Commission (KPK) and National Police have been locked in a feud for weeks after Bambang Widjojanto, a board member of the KPK, was arrested on charges of false testimony in a 5-year-old case.

That followed the Commission's naming of Budi Gunawan, Jokowi's pick as national police chief, as a suspect in a bribery case.

Chan and Sukumaran led a gang - known as the Bali 9 - that attempted to smuggle 8.3 kilograms (18 pounds) of heroin valued at $3.2 million from Indonesia to Australia in April 2005.

The seven other gang members were given life terms.

Laoly said Tuesday that the Australian ambassador in Jakarta had asked him and Attorney General Muhammad Prasetyo to cancel the execution of the two Sydney men.

"I realize that it is the duty of every state to protect its citizens. But here we apply our law," he said.

At a press conference in Jakarta on Monday, the men's lawyer, Todung Mulya Lubis, announced new plans to challenge the decree.

"We will submit a lawsuit to the State Administrative Court on Wednesday or Thursday," he said as quoted by The Jakarta Globe.

Pressure on the government is also coming from other parties.

On Sunday, a letter written by eight prisoners in Kerobokan Prison - where Myuran and Chan are being held - was leaked to the press.

The letter urged the president not to execute Chan, claiming he has drastically reformed and was a positive example to other inmates.

One prisoner, Martin Jamanuna, even offered himself as a replacement.

"I have four years with Andrew Chan, he's a good person, caring, and diligent help others. He is no longer using drugs. He teaches kindness to friends every day in the [prison] church," Jamanuna's letter read.

"I'm ready to take [the place of] Andrew to be executed if allowed," he wrote.

They mentioned the good work the pair had done in Kerobokan - including starting programs to teach computer skills, painting, drawing, movies and photography, among others - and said they had changed for the better.

"We beg you for mercy for our sons, we beg you to spare our sons' lives, we beg you that they not be killed," a statement signed by the two read.

The men lost a Feb. 4 legal bid in the Balinese capital Denpasar to have their cases reviewed, dashing their final hope of avoiding the firing squad.