The prime minister of Tibet's government-in-exile has launched a fresh campaign for autonomy, says back-channel talks with China go on 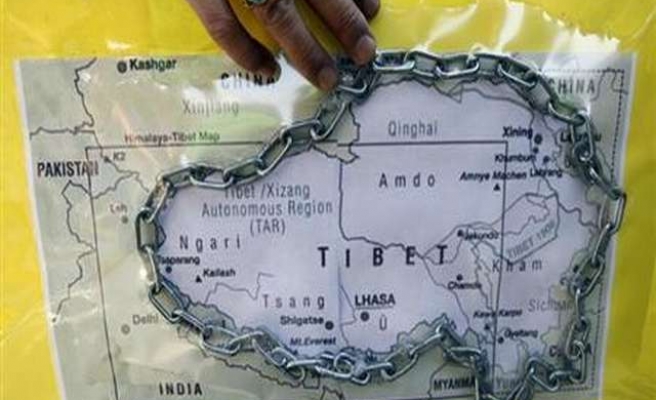 China has kept open informal channels of dialogue with the exiled Tibetan leadership even though official talks have been stalled since 2010, the prime minister of Tibet's self-proclaimed government-in-exile said on Thursday.

"This hardline policy has not worked. In the last 50 years it has gone through this vicious cycle of repression, resentment and protests. So it is clearly not working," he said.

"We remain hopeful that the time for dialogue is now ... because the Chinese leadership realises actually, given other situations in China as well, that the Tibet situation must be solved."

Sangay made his comments before the launch of a global publicity campaign aimed at persuading world governments to put pressure on China to restart the dialogue and change its policy on Tibet. The Tibetans say they are not seeking independence, but greater autonomy under the Chinese constitution.

China has ruled Tibet since 1950, when Communist troops marched in and announced its "peaceful liberation". Thousands of its people, including spiritual leader the Dalai Lama, fled into exile in India after a failed uprising against Chinese rule a few years later.

Many Tibetans feel their intensely Buddhist culture is at risk of annihilation by Beijing's political and economic domination and the migration of majority Han Chinese into the Himalayan region.

At least 112 Tibetans have died since 2009 by setting themselves on fire in protest at Chinese rule.

Representatives of the Dalai Lama held rounds of talks with China until 2010, but formal dialogue has stalled amid leadership changes in Beijing and a crackdown in Tibet. China does not recognise Sangay or the government-in-exile.

However, Xi's mother was a Buddhist and his father was friendly with Tibet's spiritual leader the Dalai Lama, giving Tibetan leaders some hope that the president who took office in 2012 could be more conciliatory.

One official close to the Dalai Lama said there were signs China had begun a review of its Tibet policy, but that no changes could be expected in the short term.

"Whether Xi Jinping will be like his father or not, still we are waiting to see, he has yet to indicate one way or the other," Sangay said in the Indian Himalayan town of Dharamsala.

The Dalai Lama devolved his political leadership to Sangay, an elected official, three years ago.

Dharamsala has been the global headquarters of Tibetan exiles since 1959. Many settled there after walking for weeks across the Tibetan plateau, bringing with them tales of torture.

"Tibetan culture is so special, so beautiful, but these days it is like a prison," said Lhamo Kyab, a guard working at Sangay's office who said he had been jailed for three years in Tibet after trying to fly a Tibetan flag. He suffered liver, hearing and sight damage from beatings in prison before being released in 2009.

The campaign launched on Thursday was blessed by the Dalai Lama, who annoyed Beijing a day earlier by praying for the "martyrs" of the bloody suppression of the Tiananmen Square uprising 25 years ago and calling for democracy in China.

As China has risen to be the world's second-largest economy, other countries have increasingly fallen in line with Beijing's demands that their leaders do not officially meet the Dalai Lama.

The Vatican has ignored three requests by the Dalai Lama for a courtesy visit to Pope Francis in recent months, an official with knowledge of the situation told Reuters. The Dalai Lama travels to Italy next week to give teachings in Livorno, but has not been granted an audience with the Pope.

"It shows the power China has even over the Vatican," the official said. "From our perspective it is just the meeting of two spiritual leaders."

He said many world leaders were unaware that the "middle way" policy of the Tibetan government-in-exile did not seek independence from China, but "genuine autonomy" and an end to repressive policies.

"To stop this repression, we are willing to compromise and not seek separation, what we are seeking is genuine autonomy for the Tibetan people within the framework of the Chinese constitution," he said.