Rohingya Muslims have been the main target of Buddhist groups, resulting in hundreds of deaths and the displacement of 120,000 people last year 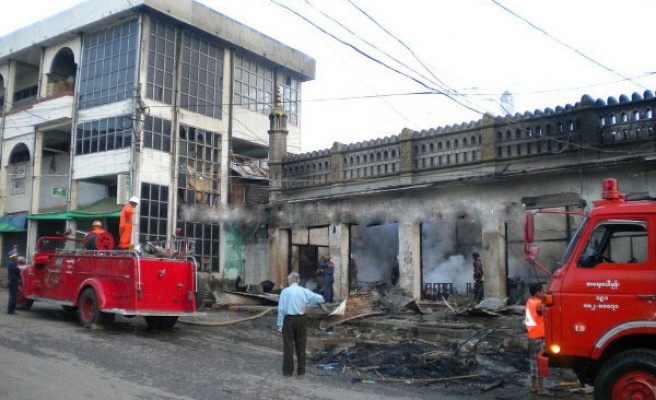 Buddhist rioters have killed four men and a 94-year-old woman and burnt down over 70 Muslim homes in Myanmar's northern state of Arakhan after a reported dispute between a Buddhist and Muslim, according to local police.

Police said clashes broke out in Thabyachaing village, about 12 miles north of the coastal town of Thandwe, on Tuesday afternoon. They said the 94-year-old woman, Aye Kyi, died of stab wounds and that between 70 and 80 houses were set on fire.

The recent trouble came after a Muslim shop owner told a Buddhist taxi driver that he could not park outside his shop. The Buddhist man then claimed that the Muslim shopkeeper had insulted Buddhism.  News spread quickly and the Muslim man was arrested but released without charge.  A mob gathered and attacked his home and a curfew was imposed after Rakhine Buddhist mobs burnt homes in villages near Thandwe.

However, according to an Anadolu Agency source in Sittwe, the capital of Arakan, the death toll is much higher but there is no way of further verifying the number as casualty reports from the region are very poor and difficult.  In the past, the initial numbers of those killed in violence provided by authorities have been very conservative.

This is not the first time that minority Muslims have been targeted in Myanmar.  Earlier this year, Buddhist mobs murdered over 40 people in the central Myanmar town of Meiktila and burnt down Muslims businesses and mosques. Muslims are still unable to return to Meiktila and are forced to live in camps.

According to Human Rights Watch, Burmese authorities “committed crimes against humanity in a campaign of ethnic cleansing against Rohingya Muslims.”

Responding to recent violence, Executive Director of Fortify Rights Matthew Smith told Anadolu Agency, “This is a continuation of what we have seen for over a year in Rakhine State. The attackers appear to be using the same brutal tactics amidst a familiar lack of security for the Muslim population.”

Smith added, “The lack of security is indefensible at this point and raises serious questions about the state and national authorities' role and responsibility for what is happening. Fortify Rights is concerned about the citizens of Thandwe and more than 150,000 people who are displaced throughout the state, many of whom still lack adequate aid despite that it has been over one year since they were displaced.”

President of Myanmar Thein Sein is visiting Arakan for the first time since violence broke out a year ago, forcing thousands of Rohingya Muslims to seek refuge in camps and to flee across the border to Bangladesh.  He was scheduled to visit Sittwe and other towns in the area, including Thandwe.

Since last year extremist Buddhist monk Wirathu and his group ‘969’ have been blamed for the violence against Muslims. The 969 group is also thought to be behind the violence in Thandwe, according to Anadolu Agency sources.