A massive defeat for Taiwan's ruling party in mid-term polls Saturday was seen as an indictment of President Tsai Ing-wen and called into question her approach to China, as well as unpopular domestic reforms. 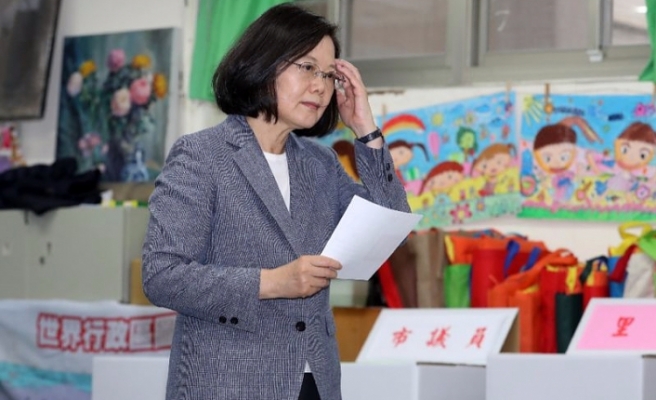 Tsai has pitched herself and her party as champions for democracy in the face of rising pressure from China, which sees Taiwan as part of its territory to be reunified.

But some voters say worsening relations with Beijing have harmed business, while others believe she has been too conciliatory.

- Why are voters angry? -
Cuts to pensions and a reduction in public holidays have compounded frustrations over a stagnant economy where salaries have not kept up with the rise in cost of living.

Analysts agree domestic issues were the main reason behind voters' punishment of Tsai's ruling Democratic Progressive Party (DPP), which saw its key seats more than halved while the Beijing-friendly opposition Kuomintang more than doubled their share.

However, concern that business is being dented by deteriorating relations with Beijing also played a part, including a dramatic drop in tourists from China since Tsai took office in 2016.

Beijing has sought to punish Tsai and her pro-independence leaning party by ramping up military drills, poaching allies and successfully persuading international businesses including airlines to list the island as part of China on their websites.

- What next for China-Taiwan relations? -
With pressure from Beijing at play in the vote result, analysts say Tsai will need to recalibrate her policy.

But while voters want assurances of stability and economic prosperity, they will not want Taiwan to move too close to Beijing -- the previous KMT government was ousted after widespread public concerns over its rapprochement with China.

"Striking a balance between productive economic relations with China while maintaining a pro-Taiwan stance in terms of identity and status, is elusive," said analyst Jonathan Sullivan of Nottingham University.

Tsai also needs to appease pro-independence factions in her own party who dislike her official stance which seeks to maintain the cross-strait "status quo".

- How will China respond? -
Beijing said the vote results showed "the strong will of the public in Taiwan in sharing the benefits of the peaceful development across the Taiwan Strait" in quotes attributed to Ma Xiaoguang, spokesperson for China's Taiwan Affairs Office, by state news agency Xinhua.

Analysts believe Beijing may see the result as proof of the success of its carrot-and-stick approach, which has offered economic incentives to Taiwanese entrepreneurs and businesses and perks to cities and counties that support the notion Taiwan is part of "one China".

- Dirty tricks campaign? -
Accusations of Beijing meddling dominated Tsai and the DPP's pre-election campaigning as they accused China of a "fake news" onslaught, which Beijing has denied.

Taiwan's Investigation Bureau is probing Chinese influence on the elections through campaign funding of candidates.

"Chinese influence in Taiwanese elections reached a new level of intrusiveness," said Nottingham's Sullivan, adding that interference would be a factor to watch going into the 2020 leadership vote.

- What about the US? -
Relations with the United States, Taiwan's most powerful unofficial ally and major arms supplier, have warmed under Tsai, another sore point for Beijing.

Analysts said the US would not be worried about the outcome of the elections, as issues of reunification or independence had not played a major role.

However, National Chengchi University's Huang said Washington may flag the issue of possible China interference in future after the US-based chairman of America's de facto embassy in Taiwan warned of "attempts by external powers" to influence debate and spread false information.