Fiji has sent tens of thousands of peacekeepers to conflict zones from Lebanon to Somalia since 1978, and calculations based on an examination of wages and force levels suggests it may have earned well over $300 million during that period. 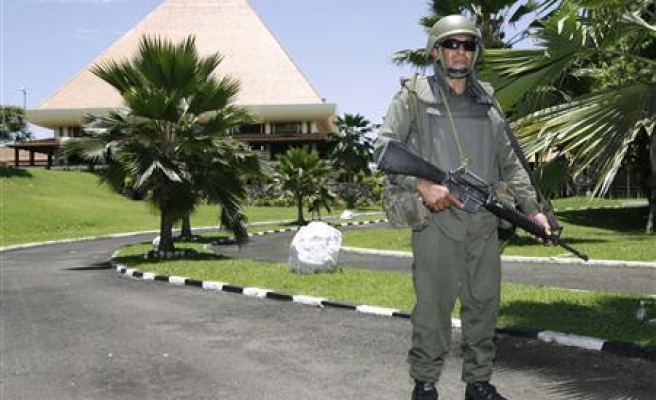 The capture of U.N. peacekeeping soldiers from Fiji in the Golan Heights last week has shone a light on a quiet export industry that has for decades drummed up cash for the Pacific nation and polished the tattered image of its military regime.

Since independence from Britain in 1970, Fiji has sent more soldiers on U.N. peacekeeping missions than any other nation, on a per capita basis.

While it provides Fiji's stalled economy with much-needed hard currency, the demand for peacekeepers appears to have pushed the country to develop a far larger military than it needs, which has in turn inflated the army's role in domestic affairs, including four coups since independence and allegations of torture and human rights abuses.

"The whole purpose of the Fiji military, at the moment, is towards sending troops on peacekeeping, especially U.N. peacekeeping," former Fijian Army Chief of Staff Jone Baledrokadroka told Reuters.

Fiji has sent tens of thousands of peacekeepers to conflict zones from Lebanon to Somalia since 1978, and calculations based on an examination of wages and force levels suggests it may have earned well over $300 million during that period.

The U.N. reimburses governments that contribute troops to peacekeeping missions at a rate of $1,332 per soldier per month, and the government is then responsible for paying them according to their national rank and salary scale.

Many of the developing nations that form the backbone of U.N. peacekeeping forces pocket the bulk of the wages and leave their troops poorly compensated.

Fiji, though, is said to pay most of the money to its troops, which is a considerable sum in local terms. That boosts the morale of men and officers whose support has been vital in maintaining almost a decade of military rule under Prime Minister Voreqe "Frank" Bainimarama.

"The reputational aspects would have been a piece of it, but I think it's a smaller piece. I think a bigger part of it was that the overseas employment was really good," a diplomat with experience in the region said under the condition of anonymity.

"The peacekeepers love it. They get a great amount of money."

Since the system seems to work so well, the question never appears to have been asked exactly why a tiny, impoverished country with no external enemies needs a larger army per capita than Australia, New Zealand or Pakistan.

Baledrokadroka, the former chief of staff, argues that the size of the military - Fiji has 9,500 active and reserve troops for just 837,000 people - is due to repeated commitments to U.N. peacekeeping operations starting in 1978 in Lebanon.

Ultimately, he said, the country's over-sized army and U.N. peacekeeping, unintentionally contributed to political instability at home as those soldiers returned home to demand a greater role in the running of the country.

"Peacekeeping is now a political football for the regime elite. They use peacekeeping as a facade to in fact entrench their military rule," he said.

Underlining the significance of such missions, Prime Minister Bainimarama, a former army chief, and current chief Brigadier General Mosese Tikoitoga went on television after the 45 Fijian soldiers were captured by militants last week, assuring the nation that everything possible was being done to secure their release.

The United Nations has long relied on developing countries to provide the majority of its peacekeeping forces, and Fiji had 734 on duty as of July, far outstripping its nearest competitors Uruguay and Rwanda on a per capita basis.

A U.N. peacekeeping official told Reuters that while few developed nations contribute uniformed forces to peacekeeping missions, they do pay a large share of the operational costs, as well as for training and equipment.

"U.N. Peacekeeping is a partnership between those who serve, those who pay and those who vote," he said.

Developed countries Austria, Japan and Croatia had pulled out from the Golan Heights mission over security concerns before the kidnapping, and former U.S. Assistant Secretary of State Christopher Hill warned against abusing the outsize commitment of developing nations to peacekeeping missions.

"Because when you wear powder blue helmets, you're not there to go to war, you're there to do a mission, which is in a very benign environment," he told Reuters in an interview.

"Obviously we don't need instability in the Golan Heights, but I think we need to be able to provide answers to Fijians and Filipinos on how their troops will be protected."

Fiji, a tropical idyll about 3,200 kilometres (1,985 miles)east of Australia, has suffered four coups since 1987, the latest in 2006 by Bainimarama, who resigned as commander-in-chief earlier this year in order to stand for the presidency in elections slated for later this month.

His government has been criticised by the U.N. High Commissioner for Human Rights for allegations of human rights abuses, including torture, carried out by a military regime comprised in no small part of former U.N. peacekeepers.

Those concerns did not slow down its contribution, though, and the U.N. has admitted it was been "forced to accept deployments from nations whose domestic human rights records are questionable" due to difficulties in drumming up recruits.

For many young men in Fiji, where unemployment is a stubbornly high 9 percent, the military is seen as a honourable and lucrative career path.

Lionel Danford, the uncle of Private James Danford, one of the peacekeepers seized in the Golan Heights, said the 20-year-old had wanted to follow in his father's footsteps.

"It's a job," he said. "It's better than being without a job and get caught on the wrong side of the law and with the wrong crowd and, most importantly, penniless."