'The conditions were laid in Beijing today, it will be said. This visit is historic. And I am weighing my words,' French president says 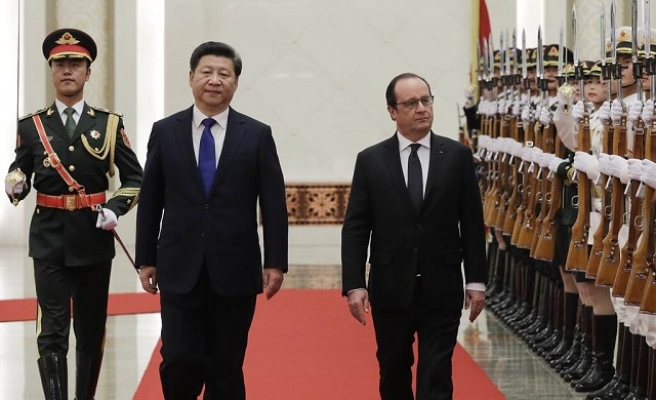 China and France agreed Monday that an international deal to tackle climate change to be negotiated in Paris should include checks on compliance, in what visiting French President Francois Hollande called a "historic" step forward.

The Paris conference will be attended by at least 80 world leaders including China's President Xi Jinping and US President Barack Obama.

It seeks to unite all the world's nations in a single agreement on tackling climate change, with the goal of capping warming at two degrees Celsius (3.6 degrees Fahrenheit) over pre-Industrial Revolution levels.

Each signatory's progress should be reviewed every five years, China and France said in a joint statement, to "reinforce mutual confidence and promote efficient implementation". They gave no details.

"The Paris accord must send a clear signal for the world to engage in a transition towards green, low-carbon development that is sustainable and resilient in the face of climate change," it said.

The two also reiterated that the deal should be legally binding -- something which China had already agreed in its submission in June to the conference.

In that document, Beijing also said checks on compliance should be "non-intrusive, non-punitive and respecting national sovereignty".

China is the world's largest polluter and will be a key player at the event, which begins on November 30, in the face of disputes over whether developed or developing countries should bear more of the burden for reducing emissions.

The joint declaration acknowledged the issue, saying that "flexibility should be offered to developing countries who should require it, according to their capacities".

Hollande said the statement was a "major step" towards an agreement in Paris, where China was "necessary, indispensable" for success.

"With this declaration, we have set up conditions which open the way to success and I am minded to believe that an agreement is now possible," he told reporters.

"The conditions were laid in Beijing today, it will be said. This visit is historic. And I am weighing my words."

But environmental campaign group Greenpeace was more measured, describing the announcement as an "incremental step forward" that showed "the ambition gap the world still needs to bridge".

Xi said that China was making "unceasing efforts" in the fight against climate change, and would carry on working to ensure that a deal was reached in Paris.

Beijing, which was blamed for scuppering a 2009 UN climate summit in Copenhagen, promised last year that carbon dioxide emissions would peak "by around 2030".

The Asian giant's stance was "drastically different" from six years ago, Greenpeace China climate policy advisor Li Shuo said, but added: "Chinese leaders need to think hard about what more to bring to the table."

China says economic uncertainty means it cannot set a precise date for when it will begin reducing emissions. It calls on developed countries to take the lead on cuts.

It also has ambitious targets to increase its use of non-fossil fuels.

The European Union, the third largest producer of greenhouse gases, pledged last year to reduce emissions by at least 40 percent by 2030 compared with 1990 levels.

In addition to preparatory talks for the UN summit, a series of cooperation and trade deals were announced.

France's Areva said that it could sell a minority stake to state-owned China National Nuclear Corporation under a draft deal signed during the visit.

Xi said he hoped Sino-French ties would "achieve a rich and varied development".

The French president's trip comes soon after a similar visit by German Chancellor Angela Merkel, who was in China last week hoping to drum up business, and after Chinese President Xi Jinping visited both Britain and the US in the last two months.