In joint statement the two countries' leaders welcomed 'the conclusion of the Inter-governmental Agreement on the acquisition of 36 Rafale fighter aircrafts in flyaway condition, except for some financial issues' 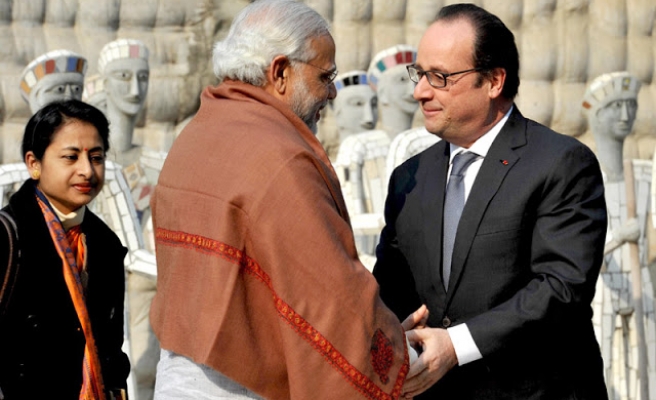 India and France have signed an agreement on the long-delayed purchase of 36 French Rafale fighter jets but have yet to reach a deal on financial issues, the leaders of both countries said Monday.

French President Francois Hollande said there remained "some financial issues" to be resolved before the purchase, first announced in 2012, could be completed.

He was speaking after holding talks with Prime Minister Narendra Modi on the second day of an official visit to India.

In a joint statement the two leaders welcomed "the conclusion of the Inter-governmental Agreement (IGA) on the acquisition of 36 Rafale fighter aircrafts in flyaway condition, except for some financial issues".

The statement did not specify what those issues were, but said both had agreed they should be resolved "as soon as possible".

Hollande's visit had raised fresh expectations that the Rafale deal would be finalised after years of tortuous negotiations.

A senior French official told reporters on Sunday the two sides were still haggling over the price, which experts say could reach around five billion euros ($5.6 billion).

The agreement for India to buy 36 Rafale fighters jets from the French company Dassault is in itself a watered-down version of a plan unveiled in 2012.

Hollande warned on Sunday that pinning down the fine details of such a deal "obviously takes time".