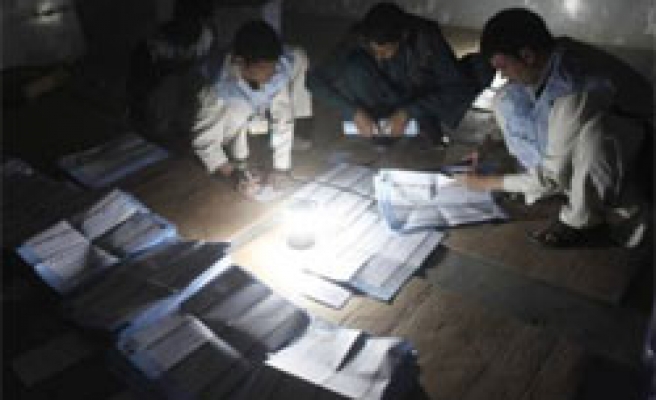 The top United Nations diplomat in Afghanistan said on Sunday it was too early to describe a parliamentary election as a success, with an expected 4,000 complaints to be heard and turnout figures not yet established.

More than 2,500 candidates contested the 249 seats in the lower house of parliament, the Wolesi Jirga with widespread reports of fraud, worryingly low voter turnout and attacks across the country that killed at least 17 people.

Election officials pored over votes on Sunday but there will be a long wait before even preliminary results are declared, with ballots still to come in from remote areas and thousands of complaints expected from unsuccessful candidates.

Some areas have started sending checked ballot boxes back to Kabul, the Independent Election Commission (IEC) told Reuters, but early signs were that almost a million fewer votes were cast than in a flawed 2009 presidential poll.

The IEC said on Saturday the number of Afghans who cast ballots was about 3.6 million.

The IEC has said there were 11.4 million voters but Staffan de Mistura, special representative for U.N. Secretary-General Ban Ki-moon told Reuters in an interview, that number only represented the number of ballot papers sent to polling stations and that the real number of eligible voters was probably closer to 10.5 million.

Before the polls, the Taliban renewed its warnings to attack foreign and Afghan targets and urged voters to boycott the votes. Their threat seemed to have some impact on turnout, with voters staying at home.

Attempted fraud was also a major concern, with reports of ballot-stuffing, repeat voting, vote-buying and other fraud coming in from across the country.

The U.S. embassy in Kabul said the results and quality of the poll would not be immediately evident.

The Free and Fair Election Foundation of Afghanistan reported "extensive irregularities" ranging from the destruction of polling centres to ballot stuffing, erratic opening and closing times of polls and interference by candidates.

In a statement on its website, FEFA called on the IEC "to ensure the integrity of the rest of the electoral process".

De Mistura said he expected as many as 4,000 complaints which the U.N.-backed Electoral Complaints Commission would have to judge. Most would come from candidates who did not win one of the 249 seats in the wolesi jirga, or lower house of parliament.

The ECC itself has termed the election "disputatious".

The final turnout figure will likely be the lowest of the four elections held in Afghanistan since the US-led invasion toppled Taliban-- presidential elections in 2004 and 2009 and parliamentary polls in 2005 and 2010.

"The declining trend signifies several things, most prominently a growing disillusionment and disengagement with the process, and the impact of a worsening security situation," Martine van Bijlert of the Afghanistan Analysts Network wrote in a blog on Sunday.

Preliminary results are due to be published on Oct. 8 at the earliest, with final results not out before Oct. 30.

The need for the ECC to adjudicate on so many complaints could push that timeframe out even further.