The Fukushima hearing, the ninth out of 11 planned n ationwide, sought to gather views on nuclear power's role in the nation's energy mix as the government struggles to cover a power shortfall by that threatens economic growth. 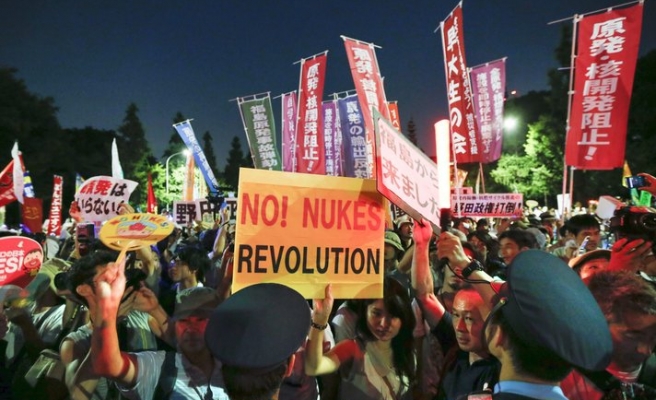 Get out of nuclear power and do it fast, angry Fukushima residents told Japanese government officials on Wednesday at a public hearing on energy policy held in an area ravaged by a nuclear disaster that has whipped up opposition to atomic power.

The Fukushima hearing, the ninth out of 11 planned n ationwide, sought to gather views on n uclear power's role in the nation's energy mix as the government struggles to cover a power shortfall by that threatens economic growth.

Meltdowns at the Tokyo Power Co. owned Fukushima nuclear plant after an earthquake and tsunami on March 11 last year led the government to shut all nuclear plants until recently, forced more than 160,0000 people to flee and raised fears of radiation exposure.

"I want all the reactors in Japan shut immediately and scrapped," a grey-haired woman, who introduced herself as a farmer living 65 km (40 miles) from the Fukushima plant, said at the public hearing in the prefecture capital.

"Many people are now aware that the government's talking of 'no immediate risk to health' is tantamount to 'long-term health risk'," she said to the applause of about 200 residents packed in a small concert hall.

Japan met about a third of its energy needs with nuclear power before the disaster and had plans to keep it as a central source of energy, in part, to combat global warming.

Now, three options that the government has put on the table are to phase out nuclear power completely as soon as possible, aim for a 15 percent share of the power supply by 2030, or a 20-25 percent share by the same date.

Residents of Fukushima, 240 km (150 miles) north of Tokyo, overwhelmingly backed the zero option, with all but one of the 30 who were picked in a draw to speak backing a swift exit.

The Asahi newspaper reported this week that elsewhere 70 percent of those taking part in the hearings opted for the nuclear-free scenario. It is not clear how the hearings will affect the final energy plan that could come as soon as this month.

But commentators said it would be hard for the government to ignore the findings as 17 months after the world's worst nuclear accident since Chernobyl, many still live in fear and thousands hired to dismantle the Fukushima plant face decades of gruelling and dangerous work.

More than 100,000 people attended an anti-nuclear rally last month and protests staged weekly outside of Noda's residence have grown, with ordinary workers and mothers with children joining the crowds.

"I'd like the government to think about why people have gathered in front of the prime minister's residence every Friday since April. That's not fashion. That's not a temporary fever. That's a heartfelt scream from the public."