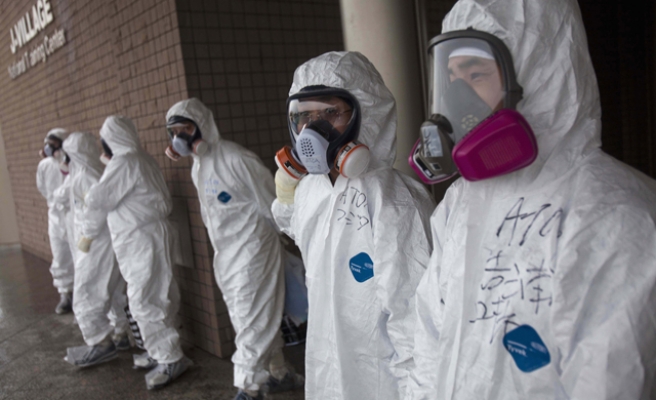 A group of Fukushima workers on Wednesday sued Tokyo Electric for unpaid wages in a potentially precedent-setting legal challenge to the utility and its reliance on contractors to shut down a nuclear plant destroyed by the industry's worst accident since Chernobyl.

The lawsuit follows a court ruling last week that the utility known as Tepco must pay compensation over the suicide of a woman who was forced from her home following the March 2011 tsunami and subsequent meltdowns at the Fukushima Daiichi power plant north of Tokyo.

The spate of legal activity is the latest blow for Tepco, which has been effectively nationalised and expects to spend more than $48 billion in compensation alone for the disaster that forced the evacuation of some 160,000 residents.

The lawsuit, filed by two current and two former Fukushima workers who wore masks to court to conceal their identities, claims that Tokyo Electric Power Co Inc and its contractors failed to ensure workers are paid promised hazard allowances, a court filing showed.

"A year ago, Prime Minister (Shinzo) Abe told the world that Fukushima was under control. But that's not the case," Tsuguo Hirota, the lawyer coordinating the lawsuit, said in an interview.

"Workers are not getting promised hazard pay and skilled workers are leaving. It's becoming a place for amateurs only, and that has to worry anyone who lives near the plant."

The workers say Tokyo Electric allowed subcontractors to skim funds allocated for wages to bolster their own profits on the decommissioning project at the expense of workers.

The lawsuit seeks the equivalent of almost $600,000 in unpaid wages from Tokyo Electric and related contractors. It marks the first time that the utility has been sued for the labour practices of the construction companies it employs.

The lawsuit also asks that the 6,000 workers at the nuclear clean-up project either be made effectively government employees, be put on the Tepco payroll directly or otherwise be fairly paid.

Hirota said he expects two additional workers will join the action immediately and that more could follow. Japanese law allows for additional plaintiffs with related claims to join an existing lawsuit.

Tokyo Electric said it had not yet received a copy of the compliant and would respond after seeing the details.

The lawsuit was filed on Wednesday morning by Hirota, the four plaintiffs and a group of supporters at a branch of Fukushima court in Iwaki, about 60 km (36 miles) south of the wrecked nuclear plant.

The plaintiffs have asked to go unnamed out of fear of reprisals from their employers. Fukushima workers say they have been cautioned against speaking to the media or others about work conditions and told they could be fired for doing so.

The plaintiffs were surrounded by a small group of supporters who also wore masks to make the identification of the workers more difficult.

Tokyo Electric said in November last year that it would double the allocation for hazard pay to workers at Fukushima to $200 per day. At the time, the utility was under intense scrutiny because of its failure to control the flow of water pouring through the mangled reactor basements, where it becomes contaminated with radiation and then leaks into the Pacific Ocean.

The utility has also declined to disclose details of contractors that employ some 6,000 workers at the Fukushima plant, citing the private nature of those contracts. It has said it relies on its contractors to enforce labour standards and safety practices.

Some 800 companies are active in the project to decommission the Fukushima reactor. The workers at the site are clearing debris, building tanks to store radioactive water and building a frozen berm of soil intended to contain groundwater and keep it from becoming contaminated.

The project is expected to take decades and will conclude when the melted fuel is removed from three of the reactors on the site that suffered meltdowns.

In addition to Tepco, the lawsuit names several listed subcontractors that it seeks to hold liable for "shared illegal conduct." Those include Taihei Dengyo Kaisha Ltd and Kajima Corp. Tokyo Power Technologies, a subsidiary of Tepco, is also named in the lawsuit.

Taihei Dengyo and Kajima said they had not yet confirmed the facts of the lawsuit.

Shares of Tepco were down 0.3 percent on Wednesday morning in Tokyo, underperforming a 0.6 percent rise in the broader market.