Pakistani Taliban has urged the government to reject Western aid for victims of devastating floods, saying it would only be siphoned off by corrupt officials. 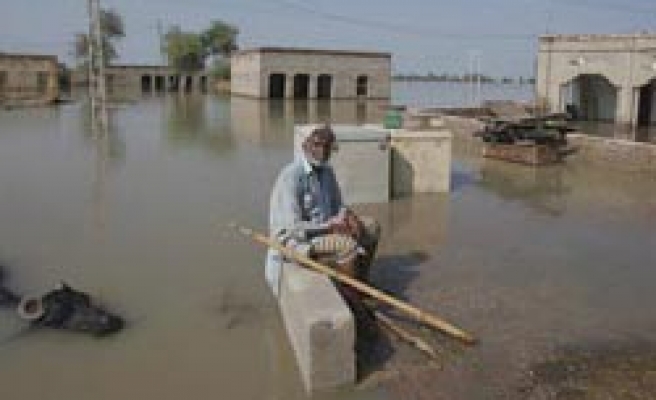 Pakistani Taliban has urged the government to reject Western aid for victims of devastating floods, saying it would only be siphoned off by corrupt officials.

"We urge the government not to take Western aid," a Pakistani Taliban spokesman, Azam Tariq, said by telephone from an undisclosed location.

"The government in Khyber-Pakhtunkhwa and the centre are desperate to get it, not for the people affected but to make their bank accounts bigger," he said, referring to the northwestern province hardest hit by the floods.

The United Nations said Monday that Pakistan's floods, now in their third week with a death toll estimated at around 1,600, have affected 13.8 million people, more than the combined victims of the three most recent major natural disasters, this January's earthquake in Haiti, the 2005 quake in northern Pakistan and the 2006 Asian tsunami.

Roiling floods triggered by unusually heavy monsoon rain have scoured the Indus river basin leaving a trail of destruction from mountains in the north to the plains of Sindh province in the south.

Hundreds of roads and bridges have been destroyed and waters have not yet crested in the south, meaning the situation could get worse in Pakistan, a U.S. ally, Reuters said.

The International Monetary Fund has warned of major economic harm and the Finance Ministry said the country would miss this year's 4.5 percent gross domestic product growth target though it was not clear by how much.

Pakistani stocks were up 0.68 percent in morning trade but dealers termed this as as "pullback" after the KSE-index fell by nearly 4 percent in the last two trading sessions.

"Investors are very confused about the impact the floods would have on the economy as a whole as the picture is still unclear and one cannot get a clear assessment of total damages," said Mohammed Sohail, director at Topline Securities Ltd.

President Asif Ali Zardari, under fire for his government's perceived sluggish response to the floods, returned home on Tuesday from foreign visits he embarked on as the disaster was unfolding.

Zardari, the widower of assassinated former prime minister Benazir Bhutto, was in the southern city of Karachi on Wednesday. Officials said they did not know if he would visit the disaster zone. Earlier they said he was expected to.

Zardari, whose popularity has never matched that of his charismatic wife, enraged his critics by going ahead with visits to meet leaders in Britain and France after the floods began.

The military, which has ruled Pakistan for more than half of its 63-year history, has taken the lead in relief efforts, reinforcing the faith many Pakistanis have in the ability of their armed forces and highlighting the comparative ineffectiveness of civilian governments.

Aid from US, UN

The United States announced an additional $20 million in help on Tuesday amid growing concern over the political, economic and security ramifications of the disaster.

The new aid brought to $55 million the amount of funds committed by Washington to relief efforts, along with U.S. military helicopters that have been airlifting survivors trapped by the worst floods in the region in 80 years.

The U.S. efforts may win Washington some support in Pakistan, where anti-American sentiment runs high.

"Let's not talk about politics. We were trapped here and they came to evacuate us. You cannot imagine the terrible feeling I had and how happy we are now," Abdul Rehman, 37, who was evacuated by a U.S. helicopter after being stranded with a new-born baby and wife in the Swat valley.

"They're doing good. Let's appreciate them."

The raging waters have washed away some 300,000 homes in all four provinces of Pakistan, and 10,663 villages have been affected, including 2,500 in Sindh, the United Nations reported.