Gujurat leader seeks to keep Muslims out of Hindu areas

Right-wing Hindu leader Pravin Togadia allegedly caught on camera offering advice on how to prevent Muslims from buying houses in areas where Hindus are the majority. 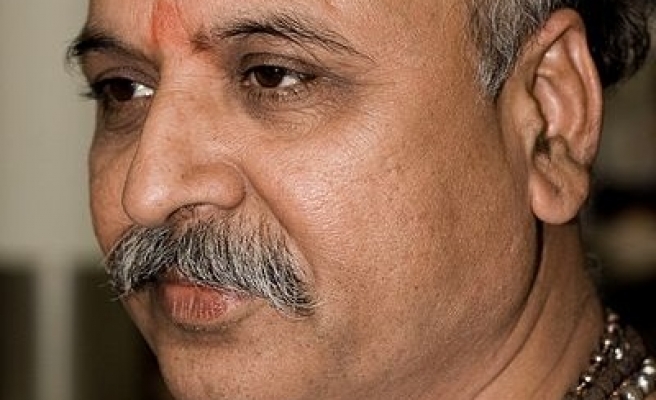 A right-wing Hindu leader was allegedly caught on camera on Monday making incendiary and hateful remarks against India's Muslim community, sparking a major political row as the country prepares for the sixth phase of the ongoing national election.

At a gathering in Bhavnagar in the western state of Gujarat, Pravin Togadia, leader of the right-wing Hindu organization Vishwa Hindu Parishad, is seen offering advice on how to prevent Muslims from buying houses in areas where Hindus are in the majority.

"Muslims have been buying Hindu properties at throwaway prices. How do you stop this?" he asks before offering two solutions.

"We should have it in us to take the law in our own hands in an area where we are a majority and scare them," Togadia is heard as saying in the purported video clip broadcast on news channels and the video sharing site YouTube.

"You put pressure on the government to enforce the Disturbed Areas Act the way we have in cities like Ahmedabad," Togadia allegedly said.

The Disturbed Areas Act is a piece of legislation which makes it tough to sell property to a member of the minority community in a neighborhood to prevent "communal tension." It also makes tough for people of minority community from making distress sales.

"Some people gathered and told me that Muslims are forcibly throwing us out, I asked them to take help of the police. The story is not about Muslims getting thrown out; it is about Muslims forcing Hindus out of their houses," Togadia said on Monday.

Vishwa Hindu Parishad is a cultural organization, part of an umbrella group of Hindu nationalist organizations that include India’s Opposition Bharatiya Janata Party, which is expected to form the next federal government in May.

The party on Monday defended Togadia. "I talked to Togadia. He said he did not make such a statement," Prakash Javadekar, the party's spokesperson, told reporters.

The ruling Congress and other parties came down heavily on the controversial right-wing Hindu leader who in the past had been accused of making anti-Muslim remarks.

"He always spreads venom, you know that. And he belongs to that category of people in this country who do not believe in the unity and the integrity of India. What can you say about people like this?," Kapil Sibal, Congress leader and federal minister was quoted by Press Trust of India as saying.

According to news channel NDTV, a complaint has been registered against Togadia on Monday by Gujarat police. Meanwhile, the Election Commission of India has sought a copy of the recorded speech.

The Bharatiya Janata Party's prime ministerial candidate Narendra Modi, who addressed two political rallies in and around Mumbai on Monday, did not comment on Togadia’s reported statement.

Retired professor Juzar Bandukwala, whose house was ransacked in Gujarat during the 2002 riots, reacted strongly to Togadia’s reported hate speech.

"Pravin Togadia has behaved in a highly provocative manner, with intent to incite communal violence against Muslims," Bandukwala told the Anadolu Agency.

"What pleasure do these merchants of hate get in producing widows and orphans who will weep for years to come? Are Hindus saying goodbye to their glorious Vedantic faith as espoused by Vivekananda and Gandhi?," he said.

Hate speech seems to be becoming a defining theme in the world’s biggest and longest running democratic election.

On Sunday, Bharatiya Janata Party member Giriraj Singh from northern state Bihar told a public gathering that the critics of Modi have no place in a country like India and they should move to Pakistan. The party did not back his statement.

Last week, two incidents of hate speech were reported from northern Indian state of Uttar Pradesh, the biggest and most populous state.

Amit Shah, a close-aide of Modi, told a Hindu community to take electoral "revenge" against Muslims for the Muzaffarnagar inter-communal riots of September 2013, which killed at least 60 people, most of them Muslims.

Azam Khan, a senior leader of ruling Samajwadi Party of Uttar Pradesh claimed at a public rally that it was the Muslim soldiers of Indian Army who fought in Kargil war against Pakistan-backed invaders in 1999.

Both Shah and Khan were banned from public campaign rallies by India’s election commission but the former was let off after he tendered an apology. Khan, who has remained defiant and refused to apologize, still cannot campaign.

All India Muslim Majlis-e-Mushawarat, the umbrella body of Indian Muslim organizations, on Monday accused the Election Commission of playing "partisan politics" by lifting the ban on Shah while retaining it in the case of Khan.

"Since the Election Commission has developed cold feet to tackle the BJP-RSS hate juggernaut, the Supreme Court of India should take suo motto notice by appointing an SIT (Special Investigation Team) to probe the hate-mongering by Sangh Parivar people during the current election campaign and bring the culprits to book," the group said in a statement.

The top Muslim body also wrote a letter to the Chief Justice of India in this regard.

The ongoing national election enters into sixth phase on Thursday.