Hagel, in Kabul, says Afghans to battle back Taliban threat

Hagel is expected to discuss security in talks with Afghan leaders and U.S. commanders. 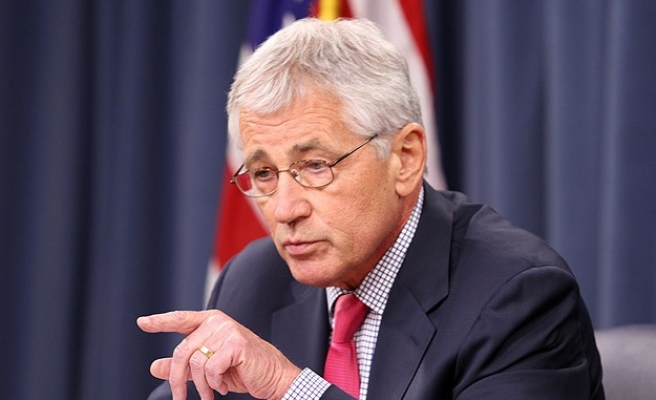 Outgoing U.S. Defense Secretary Chuck Hagel expressed confidence in the ability of Afghan forces to defend Kabul following a spike in Taliban strikes as he arrived in the Afghan capital on Saturday for his final trip to Afghanistan as Pentagon chief.

Hagel's unannounced visit came near the end of the bloodiest year in Afghanistan since the war against Taliban militants began in 2001, and after a particularly violent wave of attacks in the capital.

It also came just weeks before the official end of the NATO-led combat mission and a sharp reduction in western forces.

"I have confidence that the Afghan security forces have the capacity to defend Kabul," Hagel told reporters before landing in Kabul, where he is expected to discuss security in talks with Afghan leaders and U.S. commanders.

A U.S. defense official travelling with Hagel played down the attacks, which led the Kabul police chief to offer his resignation last weekend.

"It is a spike. It seems like it's been a concerted effort by the Taliban to conduct high profile attacks to create perceptions of instability," the official said.

As of early November, about 4,600 members of the Afghan security forces had been killed in 2014, more than 6 percent higher than the same period of 2013.

Even as U.S. officials including Hagel praised the accomplishments of Afghan forces as foreign troops moved into a support role, the high rate of Afghan casualties is seen as unsustainable. It has also raised questions about their vulnerability when U.S. forces fall to about 10,000 next year.

U.S. President Barack Obama's drawdown strategy has attracted criticism, including from Republicans in Congress, who say the hard-fought gains made against the Taliban could be lost in much the same way that sectarian violence returned to Iraq after the U.S. withdrawal.

"Are there (security) gaps? Are there continued challenges? And threats? Absolutely," Hagel acknowledged, noting Afghanistan would still struggle with "pockets" of Taliban resistance.

The Taliban have become increasingly bold in their attacks and control several districts across a country where access to many areas is still limited by rugged terrain and poor security.