Armed police stood guard outside the main mosque in Kashgar -- China's biggest -- on Tuesday, as Muslim residents in the city observed the holy month of Ramadan. 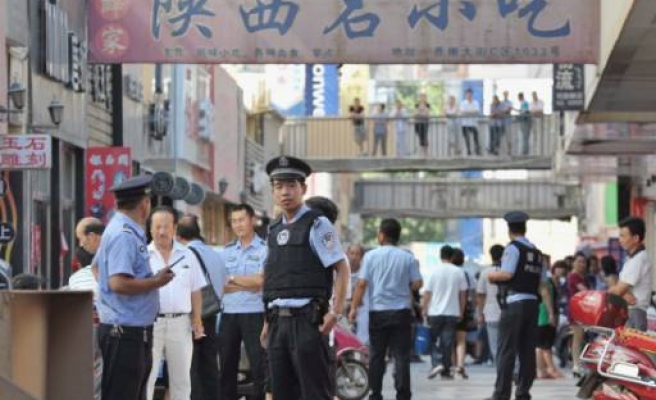 Armed police stood guard outside the main mosque in Kashgar -- China's biggest -- on Tuesday, as Muslim residents in the city observed the holy month of Ramadan.

There was a heavy police presence and the streets of the city remained quiet after the violence, but some shops and businesses had reopened by Tuesday.

An exiled regional leader blamed violence on Beijing's hardline policies towards her people.

The two suspects, Memtieli Tiliwaldi and Turson Hasan, were shot by police late on Monday in corn fields on the outskirts of Kashgar city. China on Sunday accused assailants stormed a restaurant, killed the owner and a waiter, then hacked four people to death, according to the Khasgar government website.

The attack was the latest burst of violence to rattle what Uighur call "East Turkestan", where many of the native Muslim Uighurs resent the fast flow of Han Chinese, and the bans imposed by Beijing.

Chinese officials quickly blamed the attack on Uighur Islamic fighters campaigning for an independent homeland, and claimed the ringleaders received training in making firearms and explosives in Pakistan before returning to China.

China is a close partner of Pakistan, but Beijing has pressed its neighbour over Uighurs who have fled to Pakistan, where China has accused Uighurs of having been recruited and trained by the pro-independence "East Turkestan Islamic Movement".

But Rebiah Kadeer, a prominent exiled leader of the region's Uighurs, offered a starkly different diagnosis of the tensions in her homeland and said she was skeptical about linking the attacks to the group.

"I am saddened that Han Chinese and Uighurs have lost their lives. At the same time, I cannot blame the Uighurs who carry out such attacks for they have been pushed to despair by Chinese policies," Kadeer said in an emailed statement.

"I condemn the Chinese government for the incident. The Chinese government has created an environment of hopelessness that means it must take responsibility for civilian deaths and injuries caused by their discriminatory policies," said Kadeer, president of the World Uyghur Congress, which campaigns for self-rule for Uighurs.

Uyghur is an alternative way of spelling Uighur (pronounced "Wee-gur"), the name for the Turkic-speaking people who now form a minority in their homeland due to Chinese policy.

Pro-China governor of East Turkestan or Xinjiang, Nur Bekri, visited Kashgar on Monday, and he repeated government vows that those found guilty of such attacks will be punished strictly, according to Xinjiang's official news website (http://www.tianshannet.com).

"We will harshly attack any atrocities that threaten people's lives, defile the dignity of the law, and threaten supreme national interests," Bekri said, according to the report.

Last week, two small blasts hit the city of Kashgar, which is dominated by Uighurs.

Eighteen people including 14 "rioters" were killed in an attack on a police station in Xinjiang on July 18, according to the government.

In July 2009, the regional capital Urumqi was rocked by violence between majority Han Chinese and minority Uighurs that killed nearly 200 people.

Chinese state-run media has devoted little space to the attacks, and the words "Kashgar" and "terrorist attacks" appeared to be blocked on China's Twitter-like social networking sites.