Thousands of ferry passengers were stranded after services were cancelled and the coastguard also stopped fishing boats from going to sea. 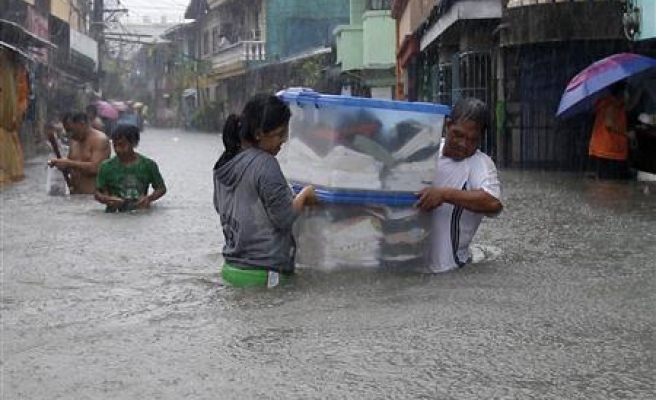 Heavy rain in the Philippine capital, Manila, caused flooding in many areas on Friday, shutting schools, government offices and financial markets as a tropical storm made landfall to the north.

Thousands of residents in low-lying areas were moved to higher ground, officials said, as flood waters rose quickly after the equivalent of half a month's usual rain fell in six hours.

The Philippine Stock Exchange suspended trade after the government cancelled work and classes in the capital.

Trading at the electronic foreign exchange platform Philippine Dealing System was also suspended, with clearing and settlement cancelled for the day.

Tropical storm Fung-Wong, with maximum winds of 85 kph (50 mph) and gusts of up to 100 kph (62 mph), made landfall at about noon in the northern rice-producing region of Cagayan, said weather forecaster Aldczar Aurelio.

The storm was moving west northwest at 22 kph (13 mph) towards the South China Sea and was expected to leave land by late on Friday, Aurelio said.

Civil aviation authorities said 40 domestic flights were cancelled and six international flights from Singapore, Thailand and China to Manila were diverted to other Philippine airports. Some flights were delayed.

Thousands of ferry passengers were stranded after services were cancelled and the coastguard also stopped fishing boats from going to sea.

More than 27,000 people were evacuated in Marikina City in the eastern part of the capital where a river burst its banks, said Del De Guzman, city mayor.

"We are now on sweeping operations for those trapped by the floods. The rains were so heavy, so fast, some were not able to evacuate," De Guzman said in an interview with GMA TV, adding the government was sending amphibious vehicles and boats to help get people out.

Disaster agency officials said two other Manila districts were flooded and they were monitoring a dam, which was nearly full.

An average of 20 typhoons hit the Philippines every year.