Many streets were impassable, cars were stuck, several fuel stations were inundated and no visible efforts were underway to drain water. 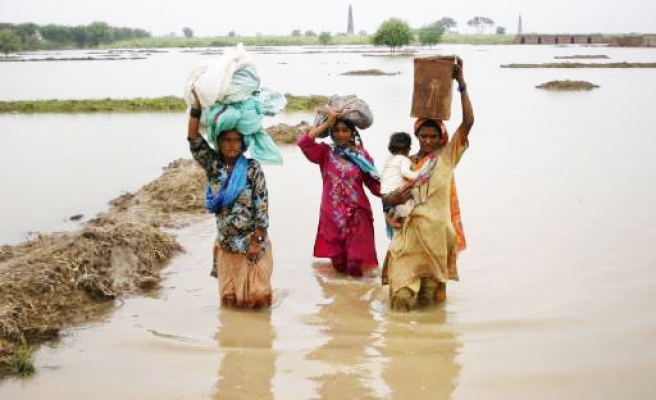 Floods triggered by monsoon rains crippled Pakistan's biggest city and commercial hub of Karachi on Tuesday, with few people able to make it to work or school, officials said.

Pakistan, regarded as one of the world's most unstable countries, is haunted by memories of last year's epic floods, which brought widespread criticism of the government because of its slow response.

In Karachi, the capital of Sindh, rain was forecast through Wednesday at least.

Many streets were impassable, cars were stuck, several fuel stations were inundated and no visible efforts were underway to drain water.

"We have recorded 50-100 mm (2 to 4 inches) of rain in Karachi and the situation is pretty bad. Many main roads and areas are inundated at the moment and it can turn even worse," said Mohammad Hussain Syed, the city's district coordination officer.

He said no casualties had been recorded.

Officials at Pakistan's main stock market in Karachi said they will close early due to negligible attendance and thin trade volumes. But the decision was later reversed.

Many banks were also closed.

"I thought I would be able to make it to work, but it was a wrong decision. Now I am stuck. My car has broken down and I can't even find anyone for help," said banker Khalid Hussain, standing knee-deep in water.

Monsoon rains sweep the subcontinent from June to September and are crucial for agriculture.

The 2010 floods killed about 2,000 people and made 11 million homeless in one of Pakistan's worst natural disasters.

One-fifth of Pakistan was then submerged in water -- an area the size of Italy -- and the government faced a $10 billion bill to repair damage to homes, bridges, roads and other infrastructure.

Karachi, on the Arabian Sea and the country's main port, contributes about two-third of the government's total tax revenue and 25 percent of Pakistan's gross domestic product, according to officials.

Floods are the last thing the city of 18 million people needs.

Neighbouring India has also been hit by floods, which have killed more than 300 people and affected close to nine million since monsoon rains started in June, said the Indian Red Cross.

The Islamabad government, reliant on an $11 billion IMF loan to keep the economy afloat, will face another major setback if floods cause heavy damage to the vital agriculture sector.

Pakistan may also have lost up to two million cotton bales, or about 13 percent of its estimated crop, due to heavy monsoon rains during harvesting in Sindh, government and industry officials said.