It has caused about $21 billion of damage, according to Sikkim's chief minister Pawan Kumar Chamling. 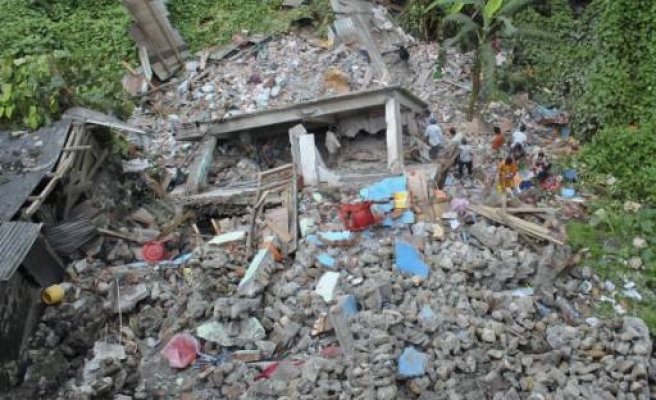 Rescue workers with sensors and sniffer dogs searched through rubble on Wednesday for more survivors of an earthquake that has killed at least 100 people in a remote Himalayan region and left many, including 400 foreigners, stranded in far-flung areas.

More than 3,000 people have been rescued in the Indian state of Sikkim, the epicentre of the 6.9 magnitude quake that jolted India, Nepal and the Chinese region of Tibet and was felt about 800km (500 miles) to the west in New Delhi.

It has caused about $21 billion of damage, according to Sikkim's chief minister Pawan Kumar Chamling.

Rescue operations have been hampered by heavy rain, thick clouds and landslides that cut off some of the worst affected areas.

Parts of north Sikkim, near the state's border with Tibet, remain out of reach as rain washed away roads that are now being hastily rebuilt by hundreds of construction workers.

Supported by army troops, construction workers were using anything from bulldozers to spades to their bare hands to clear away rocks that tumbled down in landslides and are still blocking the roads.

About 700 homes collapsed in the tremors, according to a home ministry statement. There were also local media reports that an under construction hydroelectric dam had collapsed and killed workers, but this was denied by the Sikkim government.

"The death toll is likely to go up," S.K. Pradhan, a senior civil servant stationed in north Sikkim, told Reuters.

"I think it will take a long time to restore the road communications in some areas."

The quake, which was felt as far away as New Delhi and Bangladesh, killed at least 86 people in India alone. In Tibet at least seven died and seven more were killed in Nepal.

Ruling Congress party heavyweight Rahul Gandhi, seen by his supporters as India's next prime minister, touched down on Wednesday in an air force helicopter in Gangtok, state capital of Sikkim, to meet some of the victims.

The son of Sonia Gandhi, the head of the ruling Congress party, helped manage the party when his mother was recently in the United States for undisclosed surgery, but Rahul is still seen as inexperienced.

He has won some favourable media coverage in the past for visits to poverty-stricken families, but whether the latest appearance in the quake-hit region could win voter support remains unclear.

Rescue workers are trying to airlift survivors out of the worst affected areas and distribute food and medical supplies in the country's least populous state of 600,000 people. Sikkim is poorly connected by road and has no airport. Electricity and water supply remain erratic in the state after the quake.

"In Gangtok, a few buildings have collapsed and larger buildings like the secretariat and some shopping malls have been sealed as they have developed cracks," Deepak Pradhan, a resident of the state capital told Reuters by phone.

"The roads have opened, but a lot of these landslides have occurred due to poor maintenance."

The state's economy boomed in recent years as it opened up to tourism and trade with China. Residents say landslides are a threat to hastily built new buildings in its mountain towns.

For centuries a rarely visited Buddhist kingdom known for the world's third highest peak on its border with Nepal called Kanchenjunga and glacial lakes, Sikkim joined India in 1975. With 600,000 residents, it is the least populated state and borders Bhutan, Tibet in China and Nepal.