Trio had been hoping to push their demand for greater democracy in semi-autonomous territory. 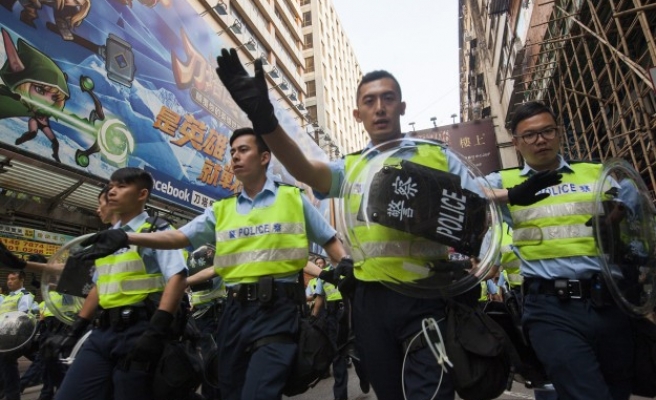 Student protest leaders were stopped from boarding a plane at Hong Kong international airport Saturday, as they attempted to travel to Beijing to deliver their demand for greater democracy in the semi-autonomous territory.

“The point of going to Beijing is to give voice to Hong Kong people's opinions,” Alex Chow, the secretary general of the Hong Kong Federation of Students - and one of the leaders attempting to travel to Beijing - had earlier told assembled reporters at the airport.

“It is hard to predict whether or not we will be allowed to enter.”

On trying to board a Cathay Pacific flight due to leave at 17.00 Hong Kong time (11.00 Turkish time) for the Chinese capital, the trio were told they had been denied boarding permits because their return permits had been invalidated.

The Hong Kong Federation of Students had said late Thursday that Chow would travel to the Chinese capital with lieutenants Eason Chung and Nathan Law in the hope of an audience with Prime Minister Li Keqiang.

Analysts had said they suspected the student leaders to be turned back once they arrive at the airport in Beijing, or even refused admittance to the Cathay Pacific flight to the Chinese capital.

“It we are not able to enter [China], it will be abnormal,” Chow said earlier Saturday.

She added that Beijing had considered their views before handing down its decision on electoral reforms in August.

She said the students' trip would be handled according to the relevant immigration laws.

China's state-run newspaper had voiced support for the authorities to refuse entry in an editorial Saturday.

“The HKFS activists are clear that their plan is just a show. They know they might not be able to enter Beijing, or if they do enter, they are unlikely to meet the state leaders,” Global Times wrote.

“But they continue the show just to create an atmosphere of martyrdom. If the three activists were arrested by authorities in Beijing, it could be a successful climax to the show – there might be a sympathetic outpour in Hong Kong if that would happen.”

The street protests, in their seventh week, are seen as the biggest challenge to Beijing's grip on Hong Kong since the handover from Britain in 1997. While around 100,000 protesters had taken to the streets at their peak, numbers have fallen – though a group of determined protesters means it rarely drops below several hundred.

This week, Hong Kong’s High Court refused to hear an appeal by protesters against injunctions to clear some occupied areas after their lawyers said it was wrong for the court to address a question of public order by way of civil litigation.

Groups representing taxi and bus drivers had sought the injunctions.

Beijing said in August that only candidates screened by a nominating committee would be able to contest a citywide vote to choose its next chief executive in 2017.