‘Our protests are fluid. We are being like water, like Bruce Lee said,’ a university student says, referring to famous quote. 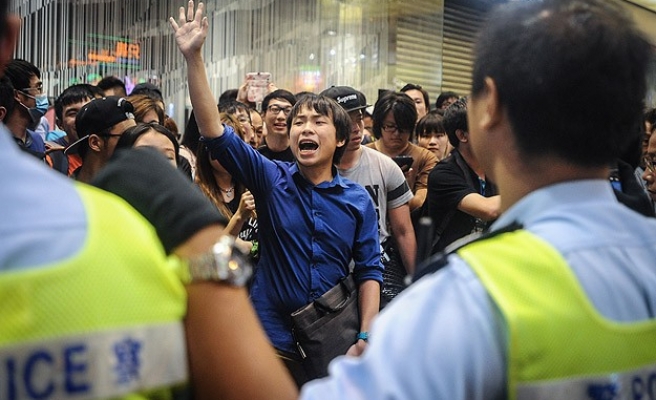 Police would clear the obstructions to allow traffic to flow and arrest some, only for the young crowds to quickly set up new obstructions in a nearby street.

"Our protests are fluid. We are being like water, like Bruce Lee said," 22-year-old protester Jason Cheung, a university student, told The Anadolu Agency, referring to a famous quote by the Chinese-American martial arts figure -- "Be shapeless, formless, like water."

Many officers appeared to have been left exasperated due to the difficulty of distinguishing between protesters who had set up the blockades and passers-by walking on the street.

Dozens of protesters even briefly occupied a section of Nathan Road before scattering.

Following clashes that lasted from Friday night to early Saturday, police said they had arrested 28 people on suspicion of unlawful assembly, assaulting and obstructing police, possessing weapons or instruments fit for unlawful purpose and disorderly conduct.

Eight officers had been injured, including two hit by hard objects thrown by protesters.

The demonstrators are demanding free elections for the semi-autonomous territory's top official in 2017. Beijing insists the city will have to choose between candidates it approves of, which critics refer to as "North Korean-style democracy."

The “mobile demonstrations” in Mong Kok are expected to continue into Saturday night, with protesters angered by what was widely seen as excessive use of force by police in the clearing of Nathan Road earlier this week.

As live television footage showed crowds gathering again in Mong Kok early Saturday evening, protesters said that keeping police busy there would prevent authorities from taking action at the two other protest sites, in the Admiralty and Causeway Bay districts.

Separately, student leader Alex Chow called on protesters Friday to bring umbrellas -- the movement’s symbol following students’ efforts to shield themselves from pepper spray in clearances earlier on -- as well as goggles and masks to Admiralty on Sunday, in a hint the protests could escalate.

Some are eager to expand their protests as the government has so far refused to make any concessions.

The protests attracted more than 100,000 at their peak. While numbers have fallen, they typically swell to several thousand at weekends and after violence is used against the demonstrators.

The demonstrations are seen as the biggest challenge to Beijing's grip on the former British colony since the handover in 1997.