The protesters are demanding a free vote for the leader of Hong Kong, a former British colony that returned to Chinese rule in 1997. 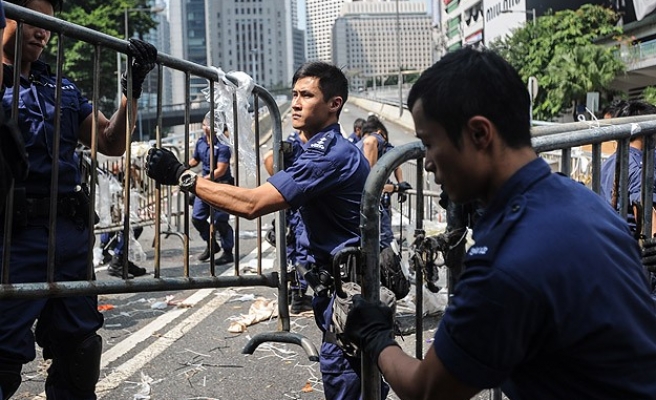 Hong Kong pro-democracy protesters were thin on the ground on Monday ahead of a possible mid-week clearance of the main camp site straddling downtown arteries, testing the patience of residents and commuters for more than two months.

Joshua Wong, one of the key student leaders, said his group would maintain the principle of non-violence during the clearance of the protest site in Admiralty, home to government offices and next to the main Central business district.

Court bailiffs and police are expected to move in from Wednesday, media have said.

"Clearance is a matter of time," said Chan, 69, who helped build and maintain the students' study area at the site. "We will continue until the last moment and then we will walk away."

The protesters are demanding a free vote for the leader of Hong Kong, a former British colony that returned to Chinese rule in 1997.

Under a "one country, two systems" formula, Hong Kong has some autonomy from the Communist Party-ruled mainland and a promise of eventual universal suffrage. Beijing has allowed a vote in the next election in 2017, but insists on screening any candidates first.

Current leader C.Y. Leung over the weekend again rejected calls for new consultation over political reform and warned protesters not to use violence when the clearance starts.

Around 100 protesters were milling around Admiralty on Monday. Most of the tents were empty with tourists taking photographs of the artwork and posters hung up around the site.

Some radical groups are expected to try to hold their ground.

"It is not a matter of resistance, but sometimes it is self-defence," said protester Platt Ho, 27.

Police have been accused of using excessive force on the protesters after the use of tear gas in September. Over the weekend, hundreds marched to protest police brutality while a group of around 30 people gathered to express their support for officers and the handling of the protests, RTHK radio reported.