HK protesters threaten to occupy new roads if moved on

With court ordering barricades removed from sites, protester tells AA 'We can always restart the protest somewhere else.' 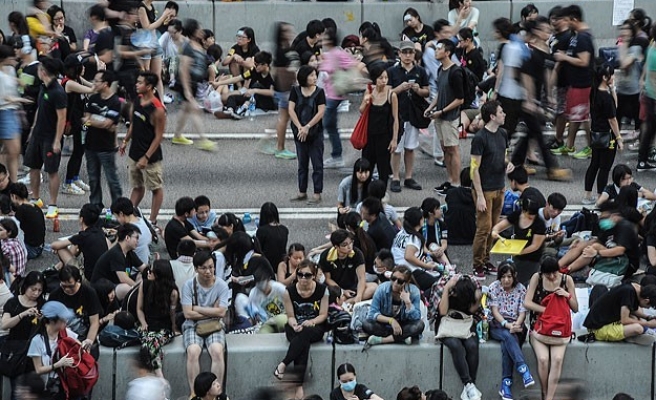 Democracy protesters appeared resigned Wednesday to police bringing their seven-week occupation of some Hong Kong sites to a close, but several said they would quickly regroup to occupy roads in new locations.

The High Court earlier this week ordered bailiffs to enforce injunctions to dismantle barricades at protest sites in two locations, and police have been authorized to remove or arrest anyone who tries to obstruct them.

"We can always restart the protest somewhere else."

Government-funded broadcaster Radio Television Hong Kong reported yesterday that some 7,000 police officers might be deployed to help bailiffs enforce the court injunctions, although there was no news when that may be.

Protesters and social commentators have speculated that now that the eyes of the world are off China - with the close in Beijing Wednesday of this week's Asia Pacific Economic Cooperation summit - the clearances could soon begin.

The majority suspicion is that police may move in early Friday.

The South China Morning Post reported Wednesday that three men had thrown rotten animal organs at the owner of the city's only pro-democracy newspaper, Apple Daily, at the main protest site, while an anti-occupy protester handed out white flowers - a symbol of death.

Media mogul Jimmy Lai is closely associated with the city's democracy movement and has regularly joined the demonstrations.

He warned against any foreign interference in Hong Kong affairs, which he said were China's internal matter.

Speaking in Beijing at a press conference alongside U.S. President Barack Obama, Xi said he had told Obama that Beijing was firmly supportive of the Hong Kong government's efforts to handle the situation in accordance with the law.