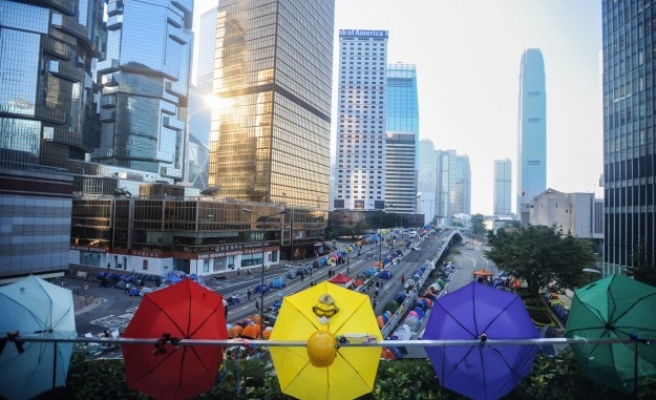 The Hong Kong High Court has ordered the main protest site where democracy demonstrators have blocked roads for more than two months to be cleared and police are expected to take action early Thursday.

A local bus company has obtained the temporary injunction against the street blockades, posting notices of the court orders in local newspapers Tuesday.

Apple Daily reported that police would publicize the date and exact time of the operation before they begin, quoting police sources.

The territory's Chief Executive CY Leung said police would use force to clear the encampments in the districts of Admiralty and Causeway Bay.

Protesters, led by student groups, have been calling for free elections in the former British colony.

The demonstrations have been overwhelmingly peaceful, however a minority have taken on a more confrontational approach.

Leung says the protests are illegal and has refused to enter talks on political reform. He has warned protesters against using violence when clearing takes place.

Some relatively unknown groups, however, have called for protesters to use shields and minimal force to resist police action.

Wong has said that even if protesters sat peacefully, police may still use force on them.

Protesters on the ground number around 100 overnight but increase to several times that in the evenings.

At their peak, the rallies have attracted around 100,000. Clashes between protesters and police increased at the end of November after the clearance of protest sites in the working-class district of Mong Kok, on the north side of Hong Kong harbor.

Hong Kong returned to Beijing rule in 1997. Under a "one country, two systems" formula, the city is supposed to maintain some autonomy.

Beijing says it will allow "one man, one vote" suffrage in the 2017 election for the chief executive, but that only candidates it approves of may stand.