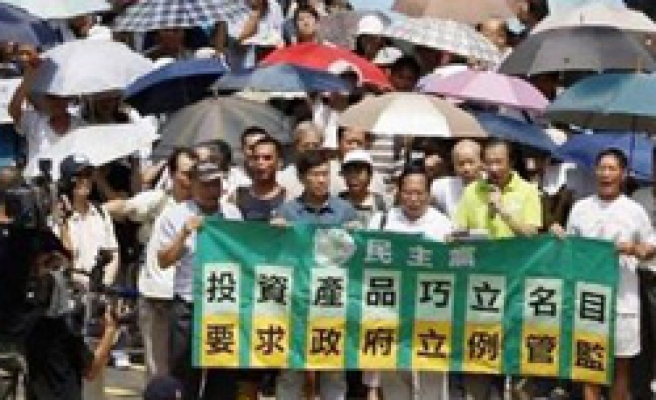 The Hong Kong government urged residents on Tuesday not to undermine the city's stability and prosperity as it braces for its largest protest in more than a decade after nearly 800,000 voted for full democracy in an unofficial referendum.

The rally could draw the largest turnout since 2003, when half a million people demonstrated against proposed anti-subversion laws which were later scrapped.

Several groups have indicated they will stage overnight vigils after the march in a possible prelude to a planned campaign to shut down the city's financial district.

Speaking at a flag-raising ceremony to mark the 17th anniversary of Hong Kong's return to Chinese rule, Chief Executive Leung Chun-ying said the government was trying hard to forge a consensus on political reform in the run-up to an election for the city's next leader in 2017.

Security was tight in the Asian financial centre, where banks and companies in the heart of the business district have made contingency plans in case protesters linger and block roads on Wednesday.

"We can see that Beijing is eroding the autonomy of Hong Kong, and we want to show we don't fear central government oppression," said Johnson Yeung, convenor of the Civil Human Rights Front, one of the organisers of the march.

Some 792,000 people, or nearly 10 percent of the city's seven million population, voted in the referendum urging Beijing to allow opposition democrats to run in a 2017 citywide election for a new leader.

The vote was organised by Occupy Central with Love and Peace, which is behind the financial district shut-down plan, and comes at a time when many Hong Kong residents fear civil liberties are being stripped away.

Beijing has allowed Hong Kong to go ahead with a popular vote in 2017, the most far-reaching experiment in democracy in China since the Communist takeover in 1949, but senior Chinese officials have ruled out allowing the public to nominate candidates.

Instead, Beijing says a small committee of largely pro-Beijing loyalists choose who gets on the ballot, effectively filtering out opposition candidates and consolidating the current standoff.

Hong Kong returned to China with wide-ranging autonomy under the formula of "one country, two systems", allowing such protests to take place. But China bristles at open dissent.

The stakes have grown markedly for Hong Kong and Chinese authorities over the past few weeks.

What was once dismissed as a fringe pro-democracy campaign by radicals has now snowballed into a populist movement with real clout and legitimacy.

Organisers of the Tuesday march expect more than half a million people to spill on to the streets, partly as a retort to a controversial "white paper" from China's cabinet in early June - an official government paper stressing Beijing's complete control over Hong Kong.