Student groups welcomed the offer of talks, but they urged followers to stay where they were to keep up the pressure on the government. 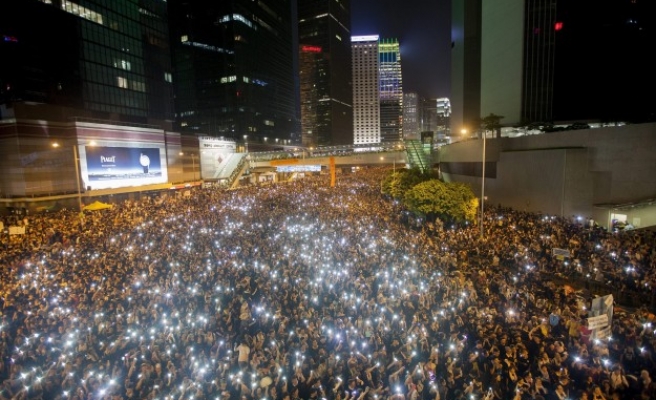 Hong Kong leader Leung Chun-ying agreed on Friday to open talks with pro-democracy protesters but he and his Chinese government backers made clear that they would not back down in the face of the city's worst unrest in decades.

Tens of thousands have taken to Hong Kong's streets in the past week to demand full democracy, including a free voting system when they come to choose a new leader in 2017. Numbers dwindled at some protest sites on Friday as rain fell and as Hong Kong people returned to work after a two-day holiday.

Leung refused to bow to an ultimatum from protesters to resign. Police have warned repeatedly of serious consequences if protesters try to block off or occupy government buildings in and around the Central financial district.

The government issued three press releases on Friday afternoon condemning the "Occupy Central" protesters and Leung warned that the disruption would not be tolerated for ever.

The protests have ebbed and flowed since Sunday when police used pepper spray, tear gas and baton charges to break up the demonstrations, which are the biggest since the former British colony was handed back to Chinese rule in 1997.

China rules Hong Kong through a "one country, two systems" formula underpinned by the Basic Law, which accords Hong Kong some autonomy and freedoms not enjoyed on the mainland and has universal suffrage as an eventual goal.

But Beijing decreed on Aug. 31 it would vet candidates who want to run for chief executive at an election in 2017, angering democracy activists who took to the streets.

While Leung made an apparent concession by offering talks, Beijing restated its resolute opposition to the protests and a completely free vote in Hong Kong.

"For a few consecutive days, some people have been making trouble in Hong Kong, stirring up illegal assemblies in the name of seeking 'real universal suffrage'," China's official People's Daily said in a front-page commentary.

"Such acts have outrightly violated the Basic Law, Hong Kong's law, as well as the principle of the rule of law, and they are doomed to fail."

Beijing, facing separatist unrest in far-flung and resource-rich Tibet and Xinjiang, is unlikely to give way in Hong Kong, fearful that calls for democracy there, especially if successful, will spread to the mainland.

The number of protesters outside Leung's office fell to hundreds on Friday as the city went back to work after a two-day holiday. Protesters prevented two trucks from delivering supplies for about 100 police guarding the office.

In a statement, Leung's office also described the blockade of pedestrian pathways outside as "serious illegal" activity. Leung himself said government meetings had been moved to former offices and had not been disrupted.

There were also signs of tension between the protesters and government employees.

"I need to go to work. I'm a cleaner. Why do you have to block me from going to work?" said one woman as she quarrelled with protesters. "You don't need to earn a living but I do."

In Mong Kok, on the Kowloon side of the harbour and one of the most densely populated places on Earth, about 1,000 Beijing supporters clashed with the protesters, storming their tents and prompting police to form a human chain as police and ambulance sirens wailed.

Some demonstrators held umbrellas for policemen in the pouring rain while anti-Occupy groups shouted at police for failing to clear the demonstrators.

"We are all fed up and our lives are affected," said teacher Victor Ma, 42. "You don't hold Hong Kong citizens hostage because it's not going to work. That's why the crowd is very angry here."

There were also scuffles in the Hong Kong island luxury shopping area of Causeway Bay where pedestrians were trying to remove protest barricades.

Some protesters suspect authorities are trying to buy time with their offer of talks to wait for numbers to dwindle.

"I hope the chief executive can stop siding with Beijing and do one thing for Hong Kong people," Martin Lee, founding chairman of Hong Kong's Democratic Party, told protesters.

"He should go to Beijing and say 'I cannot really continue to run this place unless you give Hong Kong people what they deserve and what you have promised'."

The protests have been an amalgam of students, activists from the Occupy Central movement and ordinary Hong Kongers. They have come together under the banner of "Umbrella Revolution", so called because many of them used umbrellas to ward off pepper spray used by police on Sunday.

Some now fear that the lack of any clear leadership could prove to be a telling weakness.

"We are worrying the movement will lose steam without a clear leader leading. We are worrying that people will go back to normal like nothing has happened," said protester Kenneth Mok, 22, a civil engineering graduate.

Benny Tai, who began the Occupy Central movement, said there were different groups but their goals were the same. Tai also welcomed the chance for talks with chief secretary Lam.

"We hope that we all can make use of this space to have a good dialogue to solve the current situation," Tai told reporters near Leung's headquarters.

The protests have brought parts of the Asian trading hub to a standstill. ANZ economists sent out a research note on Friday estimating that the protests may have cost retailers HK$2.2 billion ($283.5 million) so far, with retailers of luxury goods, cosmetics and consumer durables hardest hit.

The Occupy movement presents one of the biggest political challenges for Beijing since it violently crushed pro-democracy protests in and around Tiananmen Square in 1989.

Cracking down too hard could shake confidence in market-driven Hong Kong, which has a separate legal system from the rest of the country, but not reacting firmly enough could embolden dissidents in mainland China.

Hong Kong's benchmark share index, the Hang Seng, plunged 7.3 percent in September, in part because of the uncertainty surrounding the protests. It was down 2.6 percent on the week on Friday. Spooked by the protests, some banks and other financial firms have begun moving staff to back-up premises on the outskirts of the city.