Tens of thousands marched in Hong Kong on Sunday to denounce the Philippines' bungled hostage rescue in which eight Hong Kong tourists were shot dead. 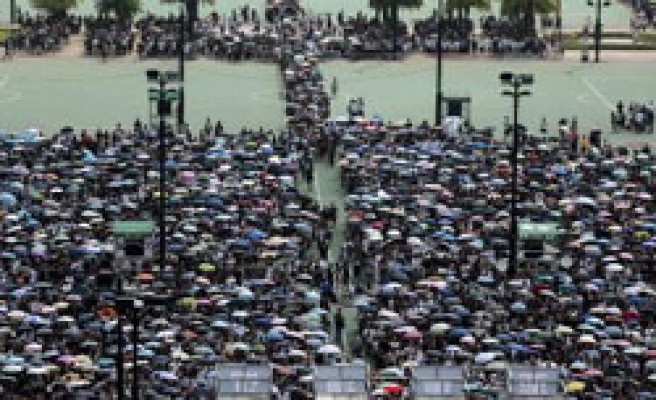 Tens of thousands marched in Hong Kong on Sunday to denounce the Philippines' bungled hostage rescue in which eight Hong Kong tourists were shot dead.

The eight Hong Kong hostages and the gunman, a sacked policeman, died in Monday's hijack and botched rescue which has been heavily criticised across the world, particularly in Hong Kong and China.

"Shame on the Philippine government and police," read one banner waved above the marchers. "We are furious," exclaimed another.

"It was a total failure," said Jo Liu, who was marching with her nine-year-old son, adding that the Philippine police were too slow and unprofessional.

Dressed mostly in black and white, many openly wept and carried flowers to mourn the eight under a blistering sun.

The coalition of major local political parties which helped organise the rally in a rare show of unity reiterated calls for a thorough and full investigation.

Hundreds of Filipinas employed as domestic helpers in Hong Kong held a candelight vigil on their traditional day off and urged the people of Hong Kong to not direct their anger at them.

The website of the Philippine Information Agency was hacked on Sunday, with media reporting a Chinese flag and obscure messages "Hacked by 7z1" and "Black Matrix Team" popping up when people tried to access the site. It was no longer happening by Sunday evening.

Philippine Presidential Communication Operations Office head Herminio Coloma said other websites under the Office of the President such as www.president.gov.ph and www.gov.ph were secure.

"We are alerting all government agencies to review and improve the security of their websites in view of the hacking... this afternoon," he said.