Benny Tai, a law professor at the University of Hong Kong, urged the protesters to go home, saying the situation had become dangerous 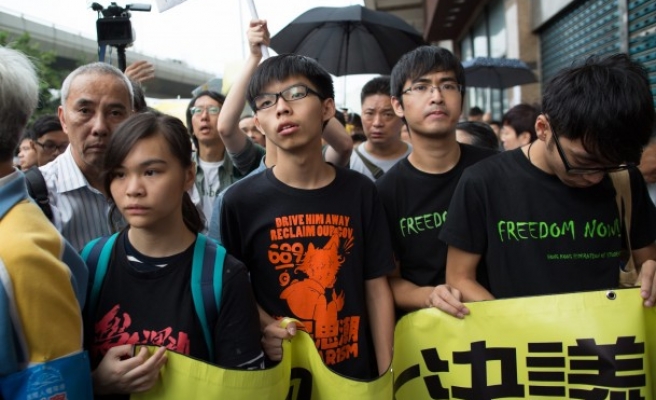 The founders of Hong Kong's Occupy Central civil disobedience movement on Tuesday called on pro-democracy activists to retreat from the city centre over fears of violence, just hours after a student leader had called on supporters to regroup.

Protesters on the streets, while united in their calls for full democracy for the Chinese-ruled city, have been split over tactics since the demonstrations started in late September and the movement has lacked a clear leadership.

On Monday, thousands of Hong Kong pro-democracy activists forced the temporary closure of government headquarters after clashing with police, defying police orders to pull back.

Benny Tai, a law professor at the University of Hong Kong, urged the protesters to go home on Tuesday, saying the situation had become dangerous.

"The government that uses police batons to maintain its authority is a government that is beyond reason," Tai, one of three leaders of the Occupy movement, told a news conference.

"For the sake of the occupier safety and for the sake of the original intention of love and peace, as we prepare to surrender, we three urge students to retreat, to put down deep roots in the community and transform the movement to extend the spirit of the umbrella movement."

The movement was named after protesters used umbrellas as flimsy shields against police pepper spray and it has become one of the biggest political challenges to face China's Communist Party leadership since it crushed pro-democracy protests in and around Tiananmen Square in 1989.

The three Occupy leaders plan said they would surrender to police on Wednesday for their role in gatherings labelled illegal by the government.

A few hours earlier student leader Joshua Wong, who announced on Monday he would go on hunger strike to demand electoral reform, urged protesters to regroup in the heart of the city. He also urged the Hong Kong government to resume dialogue with students.

Many students and younger leaders say won't they budge, vowing to fight on for full democracy in the global financial hub despite increasingly hardline tactics deployed by police.

Wong, who has been charged with obstructing court bailiffs during an operation to clear a protest camp in Mong Kok, across the harbour from Admiralty, is no stranger to protest movements.

Two years ago, with the help of secondary school activists calling themselves Scholarism, he forced the Hong Kong government to shelve plans to introduce a pro-China national education scheme in schools.

Protesters who tried ringing government headquarters on Sunday evening were charged by riot police raining truncheon blows and jets of 'pava' spray - a concentrated type of anti-riot liquid - at the heads and bodies of protesters. Scores of activists were injured.

"That so many people have shed blood is something we don't want to see," said one of the Occupy leaders Reverend Chu Yiu-ming, whose eyes welled up with tears during the press conference. "I hope everyone taking part in the movement can return home safely."

Protesters, who have occupied key streets for more than two months, have called on the city's embattled leader Leung Chun-ying to step down after Beijing in August ruled out a free choice of candidates for Hong Kong's next leader.

Hundreds of tents remain on the streets of Admiralty, next to government headquarters in the centre of the city, where students have erected a makeshift village with study areas, supply stations and art displays.

Leung said on Monday police had been tolerant but would take "resolute action", suggesting that patience may be running out.

At their peak, the Hong Kong rallies drew more than 100,000 on to the streets, but numbers have since dwindled and public support for the movement has waned.