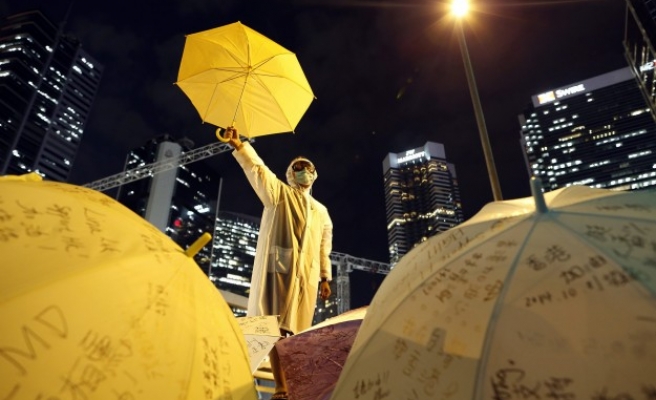 Leaders of Hong Kong's Occupy Central movement surrendered to police on Wednesday for their role in democracy protests that the government has deemed illegal, the latest sign that the civil disobedience campaign may be running out of steam.

Three founders turned themselves in a day after calling on students to retreat from protest sites in the Asia financial centre amid fears of further violence, just hours after student leader Joshua Wong had called on supporters to regroup.

The three, accompanied by Cardinal Joseph Zen, 82, former Catholic Bishop of Hong Kong, filled in forms, giving personal information, and were allowed to leave without facing any charges.

"I hope we can show others the meaning of the surrender. We urge the occupation to end soon and more citizens will carry out the basic responsibility of civil disobedience, which is to surrender," said Benny Tai, the most prominent of the Occupy leaders, after he left the police station.

Police said 24 people aged between 33 and 82 had surrendered for "taking part in an unauthorised assembly", and authorities would conduct follow-up investigations based on the information provided.

More than 100,000 people took to the streets at the height of the demonstrations but numbers have dwindled to a few hundred, mostly students, and public support has waned as the protests blocked key roads and disrupted business.

Some students defied calls for them to retreat and vowed to stay put at protest sites to press their call for free elections for the city's next leader in 2017.

But Jean Pierre Cabestan, an expert in Chinese politics at Hong Kong Baptist University, said the Occupy movement was "in tatters".

"The trouble and one of the weaknesses of the movement is there's not much coordination between the Hong Kong Federation of Students and the pan-democrats," he told foreign correspondents in Beijing.

The protesters are united in their calls for democracy for the former British colony but are split over tactics, two months after the demonstrations, also branded illegal by Beijing, began.

The Occupy call for students to pull back came a day after clashes between police and protesters in Admiralty after activists tried to ring government headquarters.

Pro-democracy media mogul Jimmy Lai said the students should withdraw. "If (the protest) keeps dragging on, it will wear down their willpower, which is exactly what Beijing wants," he told reporters.

Authorities cleared protesters from the working-class district of Mong Kok across the harbour last week, triggering running battles as students tried to regroup.

A small group remains camped out in the busy shopping district of Causeway Bay, but the bulk are in nearby Admiralty where students have erected a makeshift village.

Hong Kong returned to Chinese Communist Party rule in 1997 under a "one country, two systems" formula that gave it some autonomy from the mainland and a promise of eventual universal suffrage.

Beijing has insisted on screening any candidates for city leader first.

The Occupy Central movement had planned to lock down the heart of the financial centre around the first week of October but violent clashes between riot police and students at the end of September got the action off to an early start.