Authorities dragged away tents and other belongings and dumped them in trucks as the site was cleared and roads reopened. 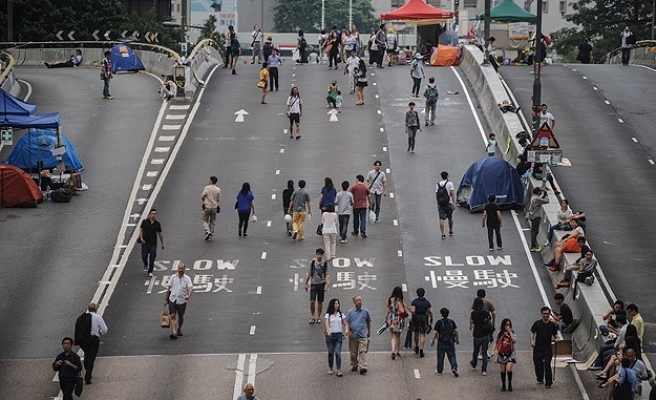 Hong Kong authorities arrested several pro-democracy activists on Monday as they cleared the last of three protest sites, marking the closure of demonstration camps in the city that have blocked streets for more than two months.

About 100 police swept into Causeway Bay, a shopping district popular with mainland Chinese tourists, to remove barricades as protesters scrambled to pack up belongings from the smallest of the three main sites.

One protester played drums next to a cardboard cut-out of Chinese President Xi Jinping as onlookers stood by. Police arrested more than a dozen protesters, including some elderly people, after they sat down and refused to move.

"I don't think it's a failure. This is not the end," said protester K.T Tang, a legal executive. "I hope the next time when we gather in the streets, we will be celebrating, instead of shedding tears for achieving nothing."

Authorities dragged away tents and other belongings and dumped them in trucks as the site was cleared and roads reopened. Police had announced on the weekend they would take action to clear the area.

The mainly peaceful protests have represented one of the most serious challenges to China's authority since the 1989 pro-democracy demonstrations and bloody crackdown in and around Beijing's Tiananmen Square.

On Thursday, police cleared most of the main protest site in the Admiralty district next to government headquarters, arresting scores of activists in a largely peaceful operation.

That followed the clearance in late November of a site in the Mong Kok neighbourhood across the harbour from the main business district, a move that sparked several nights of clashes between demonstrators and police.

Hong Kong, a former British territory, returned to Chinese rule in 1997 under a "one country, two systems" formula that gives it more autonomy and freedom than the mainland and a goal of universal suffrage.

The protesters are demanding open nominations in the city's next election for chief executive in 2017. Beijing has said voters will only be able choose from pre-screened candidates.

A handful of holdout protesters were also cleared from outside the Legislative Council building later on Monday.

Protest leaders have said they will consider other forms of civil disobedience, given Beijing's refusal to grant any concessions.

As the dust settles on the protests, China is likely to embark on a sweeping but covert campaign across the territory's judiciary, media and universities to ensure there is no recurrence, activists and politicians say.