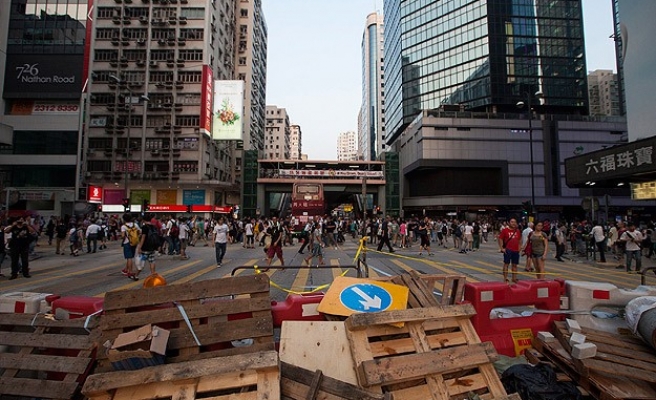 Police in the former British colony of Hong Kong continued to deny allegations Saturday that gangsters had been hired to attack pro-democracy protesters the day before and that officers had done little to stop the violence.

“There are some allegations that the police have allowed triad members to cause disturbances at the scene in Mong Kok [district],” Cheung said according to the territory's public broadcaster, RTHK. “I would like to emphasize that these are totally unfounded and are extremely unfair to police officers who faithfully and diligently perform their duty at the scene.”

Of the 19 people arrested in the crowded district of Mong Kok after the violence, eight were suspected of having triad backgrounds.

The Federation of Students said the government would need to provide a fuller explanation for the violence before they could hold talks with the administration.

Student leaders have called on their supporters to gather in Admiralty at 8 p.m. Hong Kong time to express their opposition to the violence against the peaceful protesters.

Alex Chow, Federation of Students secretary-general, said protesters would decide whether and how to escalate their demonstrations after Saturday’s assembly - subject to the government's response.

The Federation did not set any deadline or preconditions, such as the resignation of chief executive Leung Chun-ying, as they had earlier in the week.

"The government may be preparing its responses to the violent incidents, therefore we would wait and see how they respond, and then we would decide whether there is still room for dialogue," RTHK quoted Chow as saying.

Some 538 people have received medical treatment at hospitals since students began their occupation of roads one week ago.

A total of 2.8 kilometers (over 1.7 miles) of roads had been affected Saturday by the rallies on Hong Kong Island and in Kowloon, the South China Morning Post reported citing Lee Kwok-chung, senior superintendent of traffic branch headquarters. The figure is 3.4 km less than that affected the day before.

The demonstration scene outside the chief executive's office in Admiralty remained calm Saturday evening. One of the two westbound lanes of Lung Wo Road remained blocked by metal barricades set up by protesters.

In Mong Kok, the protest camp was peaceful. Although a group had forcibly dismantled a roadblock set up by students earlier in the day, they rebuilt it after the group left the scene.

The students' civil disobedience movement has seen tens of thousands participate in what is seen as the biggest challenge to Chinese rule over Hong Kong since Beijing resumed sovereignty in 1997.

Some observers worry that if the protests persist and the Hong Kong police fail to disperse the demonstrators, the Chinese military -- known as the People’s Liberation Army -- could be ordered to intervene. That scenario revives memories of the killing of student protesters in Tiananmen Square, in the heart of Beijing, in June 1989.

The 1989 movement, initiated by students to push for a democratic China, ended when the military shot dead hundreds, perhaps more than 1,000.