Those released after a day in custody include pro-democracy lawmakers, student leaders, and Apple Daily’s resigned editor-in-chief. 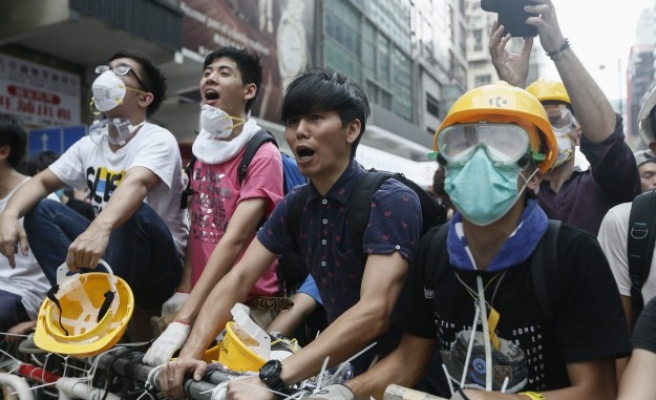 World Bulletin/News Desk
Hong Kong police have released 247 activists arrested during the clearance of a democracy protest site that blocked roads in the Chinese territory for two-and-half months.

They were released unconditionally after refusing bail, but police did not rule out prosecutions in the future.

Others were released on bail, requiring them to report back to police at a later date.

Media mogul Jimmy Lai, publisher of the pro-democracy newspaper Apple Daily, was among those released in the morning. He stepped down as editor-in-chief of the publication after his arrest.

Most demonstrators left the site in the district of Admiralty before a police-set deadline even though their demands for democracy in the former British colony had not been met.

Four pro-democracy activists were arrested at or near their homes before and during the clearance operation including Wong Yeung-tat, taken into custody on 59 counts of unlawful assembly.

The others included So Ho, assistant to pro-democracy People Power lawmaker Ray Chan; Alvin Cheng, a spokesperson for Student Front; and Raphael Wong, the vice chair of the pro-democracy League of Social Democrats who was arrested Wednesday and released a day later.

Around 909 individuals who left the site later than the 2.20 p.m. (6.20 a.m. GMT) deadline set by police had their personal details recorded.

Police reopened the highway in Admiralty that protesters had blocked after cleaners removed the remaining debris.

Police have arrested around 900 people since the demonstrations began at the end of September.

The demonstrators had been calling for a fully democratic election with open nominations for the territory's next leader, the chief executive, in 2017.

The Chinese government says it will allow "one man, one vote" suffrage but that candidates will have to be approved by a body loyal to Beijing.

Hong Kong returned to Chinese rule in 1997 under a "one country, two systems" formula that promised a high degree of autonomy from Beijing, including universal suffrage.

The protests, which involved more than 100,000 people at their peak, were seen as one of the most serious challenges to China's authority since the 1989 Tiananmen Square protests that ended with a bloody crackdown in Beijing.