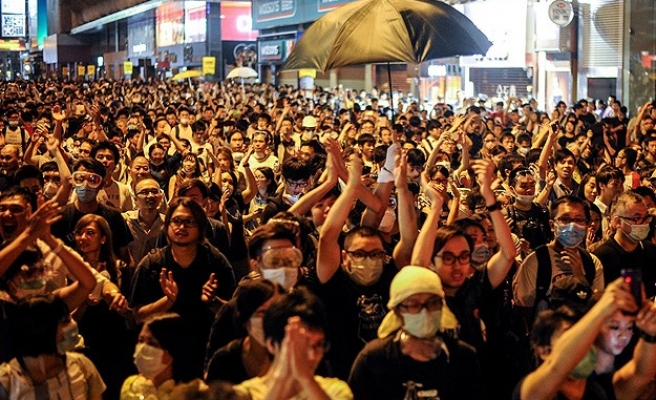 Pro-democracy protesters were attempting to occupy new streets in the flashpoint area of Mong Kok on Tuesday, hours after Hong Kong bailiffs cleared a short section of road they had blockaded for almost two months.

An Anadolu Agency correspondent at the scene said that police were charging the protesters and using pepper spray to try and disperse them.

Local satellite channel Now TV reported at 23.00 (17.00 Turkish time) that 57 protesters had been arrested for assaulting police and illegal assembly, and a further 23 held for disobeying an injunction for them to disperse and for obstructing police work.

Student leader Yvonne Leung told media that protesters would escalate their actions if police did not stop attempts to clear the protesters. Meanwhile, Hong Kong Chief Executive CY Leung said he was confident police could enforce the law.

Court authorities initially met with little physical resistance as they slowly began clearing barricades around the Mong Kok junction of Argyle Street and Nathan Road at around 10.30.

However, at least a dozen people were arrested when scuffles broke out, the South China Morning Post reported. Among those detained was lawmaker Leung Kwok-hung, known as Long Hair and a founding member of the League of Social Democrats.

The arrests began minutes after police told hundreds of protesters to stop obstructing bailiffs as they tried to reopen Argyle Street at 14.45 local time.

Earlier, protest leaders raised objections to the removals with Leung, of the Hong Kong Federation of Students, repeatedly asking bailiffs to clarify which sections of the occupied area they wanted to clear first so demonstrators could remove personal belongings.

"Their map of the area they gave did not specify exactly which areas they are going to clear," she said.

Student activist group Scholarism had urged protesters to remain peaceful and not to obstruct bailiffs. Hundreds of police stood nearby as the operation was carried out.

With the barricades cleared, the bailiffs began taking down tents and other structures inside the occupied protest zone, acting on an injunction granted to a minibus company and two taxi associations who had complained the protest was affecting their business.

Many protesters, some clad in masks and helmets, shouted for free elections and held up a three-fingered salute – a symbol from the Hunger Games film franchise that indicates opposition to authoritarianism and which has also been adopted by junta opponents in Thailand.

The protesters are demanding that the 2017 chief executive election is open to all candidates. The central government - backed by the Hong Kong executive - has plans for candidates to be screened by a pro-Beijing committee.

Student Kim Ng, 20, told the Post: "We'll keep doing what we can to show our determination [for free elections] as they clear the site."

Chief Secretary Carrie Lam Cheng, the territory’s second-ranked politician, said the police would give full support to the bailiffs during the operation.

“If the road can be cleared, it would be a relief to those members of the public and businesses that have been affected for almost two months,” she said from Beijing.

The removals follow an injunction granted by the High Court. Last week bailiffs removed part of the protest site outside CITIC Tower in Admiralty. A third site at Causeway Bay is not subject to any court orders. The notices allow for anyone obstructing the removals to be arrested for “criminal contempt of court.”

Meanwhile, police removed the tents and other belongings of about 20 protesters from outside the British consulate on Monday, the Post reported.

The two-month old pro-democracy protests are seen as the biggest challenge to Beijing's grip over the former British colony since the handover in 1997.