With the crowds chanting "surround government headquarters" and "open the road", hundreds of people made their way to the buildings in Admiralty, next to the city's central business district 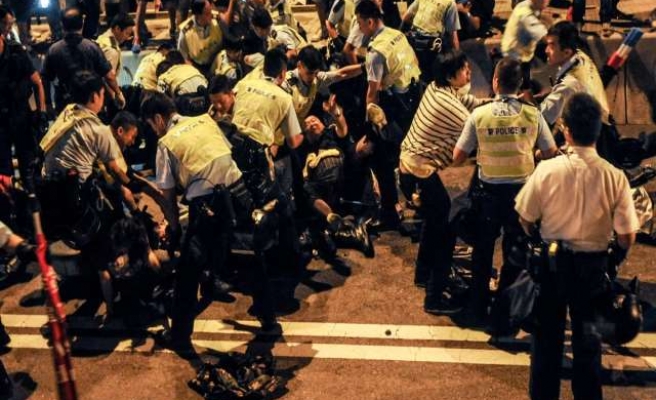 Hong Kong police baton-charged and pepper-sprayed thousands of pro-democracy demonstrators in the early hours of Monday who were trying to encircle government headquarters, defying orders to retreat after more than two months of protests.

The skirmishes were perhaps the most violent in recent weeks, with the protesters answering a call by two student groups leading the campaign to escalate their actions, after two months of stalemate in their push for full democracy.

The crowds, chanting "Surround government headquarters!" and "Open the road!", had blocked a major road running in front of the offices of Hong Kong's leader in the Admiralty district, next to Hong Kong's central business district, late on Friday.

Hundreds of riot police scattered the crowds in chaotic scenes, forcing protesters back with pepper spray and batons, aimed at the backs and heads of those trying to scramble over walls to safety in a crush of bodies. A cloud of tear gas rose up in the middle of one particularly violent scuffle.

Scores of volunteer medics attended to the injured, many with open head wounds. Police said at least 18 arrests were made.

Despite the relatively swift clearance of Lung Wo road outside government headquarters in the early hours of Monday, large crowds, many in protective goggles and makeshift body armour, refused to leave the area and continued to press against police lines, chanting "We want universal suffrage!".

Others held up yellow umbrellas, a flimsy defence against police batons and pepper spray that have become a symbol of the pro-democracy movement in Hong Kong, which reverted from British to Chinese rule in 1997.

The protesters are demanding free elections for Hong Kong's next leader in 2017, not the vote between pre-screened candidates that China's Communist Party has said it will allow.

The movement has threatened to become the biggest challenge to the party since its bloody 1989 crackdown on pro-democracy student protests in and around Tiananmen Square in Beijing, as a new generation demands greater political freedom.

The Hong Kong rallies drew more than 100,000 on to the streets at their peak, but numbers have since dwindled to a few hundred and public support has waned.

The Admiralty flare-up came after four nights of clashes in the working-class district of Mong Kok, one of the city's largest and most volatile protest zones, which police had cleared of protesters on Wednesday.