Underlining nervousness among some activists that provocation on National Day could spark violence, protest leaders urged crowds not to disturb the flag-raising ceremony on the Victoria Harbour waterfront on Wednesday morning. 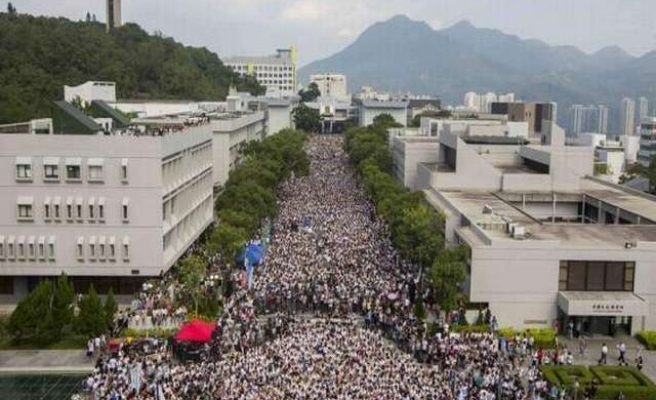 Thousands of pro-democracy protesters thronged the streets of Hong Kong on Wednesday, some of them jeering National Day celebrations, as demonstrations spread to a new area of the city, ratcheting up pressure on its pro-Beijing government.

There was little sign of momentum flagging on the fifth day of the mass campaign, whose aim has been to occupy sections of the city and express fury at a Chinese decision to limit voters' choices in a 2017 leadership election.

Many had feared police would use force to move crowds before Wednesday's start to celebrations marking the anniversary of the Communist Party's foundation of the People's Republic of China in 1949. Those fears proved unfounded.

The crowds have brought large sections of the Asian financial hub to a standstill, disrupting businesses from banks to jewellers. Overnight thunderstorms failed to dampen spirits and the protesters woke to blue skies on Wednesday.

Riot police had used tear gas, pepper spray and baton charges at the weekend to try to quell the unrest but tensions have eased since then as both sides appeared prepared to wait it out, at least for now.

Protests spread from four main areas to Tsim Sha Tsui, a shopping area popular with mainland Chinese visitors. It would usually do roaring trade during the annual National Day holiday.

Underlining nervousness among some activists that provocation on National Day could spark violence, protest leaders urged crowds not to disturb the flag-raising ceremony on the Victoria Harbour waterfront on Wednesday morning.

Proceedings went ahead peacefully, although scores of students who ringed the ceremony at Bauhinia Square overlooking Hong Kong harbour booed as the national anthem was played.

A beaming Hong Kong Chief Executive Leung Chun-ying, who was appointed by Beijing, shook hands with supporters waving the Chinese flag even as protesters who want him to stand down chanted: "We want real democracy".

"We hope that all sectors of the community will work with the government in a peaceful, lawful, rational and pragmatic manner ... and make a big step forward in our constitutional development," Leung said in a speech.

The Hong Kong and Chinese flags billowed in the wind at the completion of the ceremony but one of the main protest groups said they marked the occasion "with a heavy heart".

"We are not celebrating the 65th anniversary of China. With the present political turmoil in Hong Kong and the continued persecution of human rights activists in China, I think today is not a day for celebrations but rather a day of sadness," said Oscar Lai, a spokesman for the student group Scholarism.

Hundreds of demonstrators had gathered outside luxury stores and set up makeshift barricades from the early hours of Wednesday in anticipation of possible clashes. As in most parts of Hong Kong, the police presence was small.

M. Lau, a 56-year-old retiree, said he had taken to the streets of Hong Kong to protest in the 1980s and wanted to do so again in a show of solidarity with a movement that has been led by students as well as more established activists.

"Our parents and grandparents came to Hong Kong for freedom and the rule of law. This (protest) is to maintain our 160-year-old legal system for the next generation," Lau said.

The protests are the worst in Hong Kong since China resumed its rule of the former British colony in 1997. They also represent one of the biggest political challenges for Beijing since it violently crushed pro-democracy protests in Tiananmen Square in 1989.

Cracking down too hard could shake confidence in market-driven Hong Kong, which has a separate legal system from the rest of China. Not reacting firmly enough, however, could embolden dissidents on the mainland.

China rules Hong Kong under a "one country, two systems" formula that accords it some autonomy and freedoms not enjoyed in mainland China, with universal suffrage an eventual goal.

However, protesters reacted angrily when Beijing decreed on Aug. 31 that it would vet candidates wishing to run for Hong Kong's leadership.

Leung has said Beijing would not back down in the face of protests and that Hong Kong police would be able to maintain security without help from People's Liberation Army (PLA) troops from the mainland.

Communist Party leaders in Beijing worry that calls for democracy could spread to the mainland, and have been aggressively censoring news and social media comments about the Hong Kong demonstrations.

Cybersecurity researchers in the United States said they had found a computer virus that spies on Apple Inc's iOS operating system for iPhones and iPads that they believe is targeting the protesters in Hong Kong.

Researchers from Lacoon Mobile Security said the code used to control the server was written in Chinese by "really sophisticated guys".

Hong Kong shares fell to a three-month low on Tuesday, registering their biggest monthly fall since May 2012. Markets are closed on Wednesday and Thursday for the holidays.

The city's benchmark index has fallen 7.3 percent over the past month, and there are few indications that the protests are likely to end any time soon.

Mainland Chinese visiting Hong Kong had differing views on the demonstrations, being staged under the "Occupy" banner.

"For the first time in my life I feel close to politics," said a 29-year-old tourist from Beijing surnamed Yu. "I believe something like this will happen in China one day."

A woman surnamed Lin, from the southern Chinese city of Shenzhen, however said the protesters' demands for a democratic election were "disrespectful to the mainland".

"Even though the government has brought a lot of development to Hong Kong, they don't acknowledge this," Lin said.

The outside world has looked on warily.