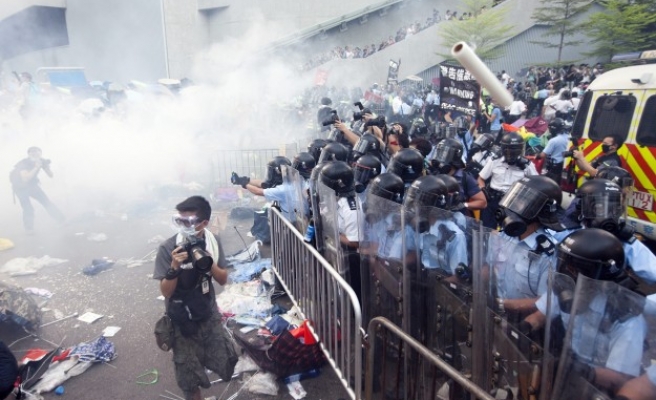 Hong Kong democracy protesters defied volleys of tear gas and police baton charges to stand firm in the centre of the global financial hub on Monday, one of the biggest political challenges for Beijing since the Tiananmen Square crackdown 25 years ago.

The unrest, the worst in Hong Kong since China resumed its rule over the former British colony in 1997, sent white clouds of gas wafting among some of the world's most valuable office towers and shopping malls before riot police suddenly withdrew around lunchtime on Monday, after three nights of confrontation.

"Since calm has been largely restored to the streets where citizens gathered, riot police have withdrawn," the Hong Kong government said in a statement. It called on protesters to stay calm and disperse peacefully "as soon as possible".

China rules Hong Kong under a "one country, two systems" formula that accords the territory limited democracy. Tens of thousands of mostly student protesters are demanding Beijing give them full democracy, with the freedom to nominate election candidates, but China recently announced that it would not go that far.

China opposes any external force supporting "illegal movements" such as Occupy Central, the Chinese Foreign Ministry said on Monday in reference to the pro-democracy movement.

As riot police withdrew on Monday, weary protesters slept beside roads or sheltered from the sun beneath umbrellas, which have become a symbol of what some are calling the "Umbrella Revolution". In addition to protection from the elements, umbrellas have been used as flimsy shields against pepper spray.

Nicola Cheung, an 18-year-old student from Baptist University, said the protesters in the central Admiralty district were assessing the situation and planning what to do next.

"Yes, it's going to get violent again because the Hong Kong government isn't going to stand for us occupying this area," she said. "We are fighting for our core values of democracy and freedom, and that is not something violence can scare us away from."

Organisers have said that as many as 80,000 people have thronged the streets after the protests flared on Friday night. No independent estimate of numbers was available.

The protests, led mostly by young tech-savvy students who have grown up with freedoms not enjoyed in mainland China, represent one of the biggest threats confronted by Beijing's Communist Party leadership since its bloody 1989 crackdown on pro-democracy student protests in and around Tiananmen Square.

Cracking down too hard could shake confidence in market-driven Hong Kong, while not reacting firmly enough could embolden dissidents on the mainland.

Televised scenes of the chaos in Hong Kong over the weekend have also made a deep impression on many viewers outside Hong Kong. That was especially the case in Taiwan, which has full democracy but is considered by China as a renegade province that must one day be reunited with the Communist-run mainland.

The U.S. Consulate General in Hong Kong issued a brief statement calling for all sides to "refrain from actions that would further escalate tensions".

Banks in Hong Kong, including HSBC, Citigroup , Bank of China, Standard Chartered and DBS, temporarily shut some branches and advised staff to work from home or go to secondary branches.

The Hong Kong Monetary Authority (HKMA), the city's de facto central bank, said it had activated business continuity plans, as had 17 banks affected by the protests.

The HKMA said the city's interbank markets and Currency Board mechanism, which maintains the exchange rate, would function normally on Monday. It said it stood ready to "inject liquidity into the banking system as and when necessary".

Hong Kong witnessed extraordinary scenes at the weekend as thousands of protesters, some armed with nothing more than umbrellas, blocked the main road into the city and police responded with pepper spray, tear gas and baton charges.

Markets more or less took the weekend's unrest in their stride, proof yet again of the pre-eminent place trade has always taken in Hong Kong.

Some protesters erected barricades to block security forces early on Monday, although a relative calm descended after dawn. By mid afternoon, hundreds of protesters were seen streaming again into downtown areas of Hong Kong island. A bus draped with a banner reading "Democracy" was parked haphazardly across a main road.

People placed discarded umbrellas over students sleeping in the sun, while others distributed water and masks to guard against tear gas and pepper spray.

Only hours earlier, police had baton-charged a crowd blocking a road into the main government district in defiance of official warnings that the demonstrations were illegal.

Protesters called on Hong Kong leader Leung Chun-ying to step down. Several scuffles broke out between police in helmets, gas masks and riot gear, and demonstrators angered by the firing of tear gas.

"If today I don't stand up, I will hate myself in future," said taxi driver Edward Yeung, 55, as he swore at police. "Even if I get a criminal record it will be a glorious one."

Some of the younger students said they would return to classes on Monday afternoon.

In 1989, Beijing's Tiananmen crackdown sent shockwaves through Hong Kong as people saw how far China's rulers would go to keep their grip on power.

Thousands of protesters still milled around the main Hong Kong government building on Monday, ignoring messages from student and pro-democracy leaders to retreat for fear that the police might fire rubber bullets.

Some teachers, and union members from Swire Beverages went on strike on Monday, and vowed to join the student protesters.

At the height of the clashes police, in some places lined five deep, used pepper spray against activists and shot tear gas into the air. The crowds fled several hundred metres, hurling abuse at police they called "cowards".

"I don't care what they do because the more violence they use, the more people they attract to come here," Jimmy Lai, a Hong Kong media magnate and an outspoken critic of Beijing, told Reuters.

"It's very frightening for Beijing but it's very cheering for us. Look at these kids. This is our future," said Lai, choking back tears.

The "one country, two systems" formula guarantees Hong Kong a high degree of autonomy and freedoms not enjoyed in mainland China, with universal suffrage set as an eventual goal.

However, Beijing last month rejected demands for people to freely choose the city's next leader, prompting threats from activists to shut down the Central business district.

China wants to limit 2017 elections to a handful of candidates loyal to Beijing. Communist Party leaders worry that calls for democracy could spread to cities on the mainland.

A spokesperson for China's Hong Kong and Macau Affairs Office said the central government fully supported Hong Kong's handling of the situation "in accordance with the law".

Such dissent would never be tolerated on the mainland, where the phrase "Occupy Central" was blocked on Sunday on Weibo, China's version of Twitter.