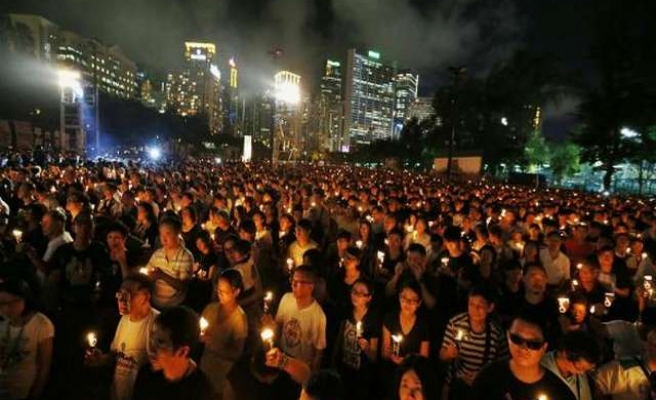 Hong Kong police used pepper spray to disperse pro-democracy activists on Monday as the Asian financial centre braces for a wave of disruptive protests against China's decision to rule out full democracy.

China's National People's Congress (NPC) Standing Committee set the stage for a political showdown on Sunday when it rejected democrats' demands for the right to freely choose Hong Kong's next leader in 2017, leading scores of protesters to take to the streets.

Scuffles broke out on Monday during a tense stand-off at the entrance to a centre where a senior Chinese official was explaining Beijing's decision, prompting police to use pepper spray amid chaotic scenes inside and outside the venue.

Activists from a movement called Occupy Central have threatened to lock down Hong Kong's financial district on an unspecified date unless Beijing grants full democracy.

"Occupy Central is an illegal activity. If we give in, it will trigger more illegal activities," said Li Fei, deputy secretary general of the NPC Standing Committee, who flew to Hong Kong to explain Beijing's decision.

Pro-democracy activists inside the building heckled Li, shouting slogans and interrupting his speech.

Hong Kong returned to Chinese rule in 1997 with wide-ranging autonomy and freedoms not enjoyed on the mainland under a policy of "one country, two systems".

The activists want universal suffrage, but Communist Party rulers in Beijing say any candidate for the territory's chief executive has to be first approved by a nominating panel - likely to be stacked with pro-Beijing loyalists and making it almost impossible for an opposition democrat to get on the ballot.

If Hong Kong lawmakers voted down the package, governing Hong Kong would become much more difficult, Li said. The next leader would again be chosen by a small committee without any form of popular vote.

But Hong Kong leader Leung Chun-ying tried to cast the NPC decision in a good light.

"There is still room for discussion in regards to the issue in Hong Kong legislation," he said.

Dressed in black and wearing yellow ribbons, members of the democratic camp were escorted out of the auditorium after they shouted and held up signs reading "shameful" and saying Beijing had lost credibility. Pro-establishment people in the crowd clapped as the democrats were led out.

Alex Chow, head of the Hong Kong Federation of Students, was also removed as he criticised the NPC's Li.

"Hong Kong is our turf," Chow shouted. "The NPC doesn't represent us. Stop insulting us. Hong Kong people won't be insulted by you again."

Student activists said they would begin boycotting classes in mid-September.

About 100 activists had gathered for Li's speech, some waving British colonial flags and banners with an "X" over the Chinese characters for "communism" amid a heavy police presence. A group of Beijing loyalists stood nearby waving China's flag.

The NPC Standing Committee endorsed a framework to let only two or three candidates run in Hong Kong's 2017 leadership vote. All candidates must first obtain majority backing from the nominating committee.

Political reform has been a major source of tension in Hong Kong, with China party leaders fearful of calls for democracy spreading to other cities.

The Mainland Affairs Council in self-ruled Taiwan, which China regards as a breakaway province, expressed "regret" at the NPC's decision while activist groups posted messages of support for the democracy movement online. China has held out the "one country, two systems" formula as a solution for Taiwan, an idea ridiculed by Taipei.

Following the publication by Beijing of a white paper outlining China's authority over Hong Kong in June, democracy activists held an unofficial referendum on voting in the "special administrative region", and hundreds of thousands marched to the city's business district and staged a sit-in.

"We believe, in the case of Hong Kong, in one country and two systems," he said.

British Deputy Prime Minister Nick Clegg said in July that Britain "would not shy away from defending" one country, two systems.

Britain made no mention of democracy for Hong Kong until the dying days of about 150 years of colonial rule.