Beijing last month rejected demands for people to freely choose the city's next leader in 2017, insisting that candidates have to be pre-screened 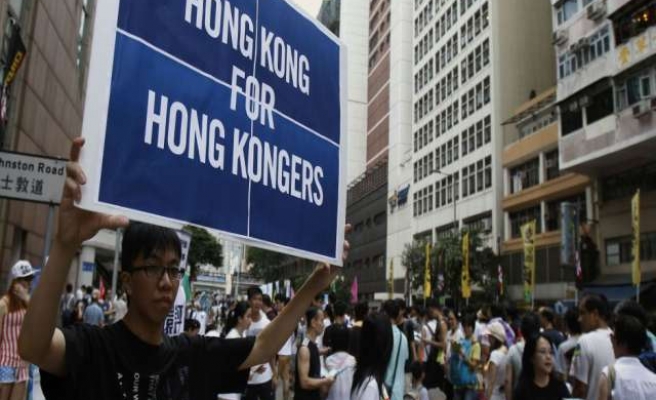 Hundreds of Hong Kong students marched through the heart of the financial centre on Wednesday chanting pro-democracy slogans ahead of a planned blockade of government buildings if the city's leader fails to discuss their demands for free elections.

Others remained in a park flanking government headquarters where they sat in temperatures of up to 30 degrees Celsius (86 degrees Fahrenheit), listening to lectures by sympathetic academics in the middle of a week-long class boycott.

Hong Kong returned to Chinese rule in 1997 with a high degree of autonomy and freedoms not enjoyed on the mainland under a formula known as "one country, two systems".

But Beijing last month rejected demands for people to freely choose the city's next leader in 2017, insisting that candidates have to be pre-screened, prompting threats from pro-democracy activists to shut down Central business district.

The city's leader, Leung Chun-ying, declined to discuss the students' demands with them on Tuesday, prompting them to set a 48-hour deadline, saying they would surround and paralyse key government buildings if he did not face them.

"We must fight back, democracy now," student leader Lester Shum shouted. "Hong Kong is my home ground, (Beijing) is not representing me."

About two dozen police stood guard outside the Hong Kong leader's offices, where barriers were in place.

"We urge all Hong Kong residents to join us for the October 1 banquet and peacefully Occupy Central," said Lau Kay Ee, a member of a women's association who joined the student march, referring to China's National Day holiday when activists are expected to blockade Central.

"Hong Kong is my place," she said. "Democracy is in my hands."

The former British colony's relationship with Beijing has become increasingly fraught in recent months as activists push for freedoms they believe are theirs under the "one country, two systems" formula.

Communist Party leaders in Beijing, for their part, are terrified of calls for democracy spreading to cities on the mainland, threatening their grip on power.

Such dissent would never be allowed on the mainland, where student protests calling for democracy were crushed with heavy loss of life on and around Beijing's Tiananmen Square on June 4, 1989.

A Muslim economic professor was jailed for life in the western Chinese region of Xinjiang on separatism charges on Tuesday, a sentence that rights advocates said sent a clear signal that Beijing is determined to suppress dissent.

Confidence in "one country, two systems" is at the lowest it has been since the University of Hong Kong's public opinion programme began tracking the issue in 1993, it said in a survey released on Tuesday.

More than half, or 56 percent, of the 1,000 people in Hong Kong surveyed by telephone in September said they had "no confidence" in the system.

The student boycott is the latest in a string of civil disobedience actions including an unofficial civil referendum, marches, rallies and a brief occupation of Central that led to more than 500 arrests.