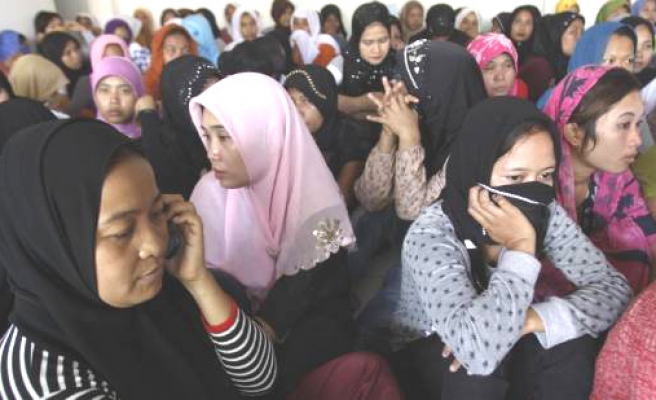 A Hong Kong mother of two was found guilty on Tuesday of abusing her Indonesian domestic helper in a landmark case that triggered outrage over mistreatment of maids and shed light on abuse that many women face in overseas jobs.

Former beautician Law Wan-tung, 44, sobbed as the judge remanded her in custody after finding her guilty of 18 of 20 charges laid against her.

The charges included grievous bodily harm and violence against Erwiana Sulistyaningsih and two other maids, also from Indonesia.

Law had pleaded not guilty to the 20 charges but had admitted to one of not buying insurance cover for her maid.

Erwiana, wearing a black T-shirt with "Justice" on the front and "End slavery" on the back, was in court and clapped, along with scores of supporters, after the verdict.

"I'm very happy I won the case ... because I will get justice from Hong Kong," a smiling Erwiana said afterwards as supporters thronged around her.

"The guilty verdict is a damning indictment of the government's failure to reform the system that traps women in a cycle of abuse and exploitation," said Norma Kang Muico, a researcher for the rights group Amnesty International.

The court had heard how Erwiana was beaten and denied food and also had her passport confiscated. Law was also accused of failing to pay wages and not allowing Erwiana days off.

Law had threatened to kill her domestic helpers' relatives if they disclosed abuse, the court heard.

A police investigator said Law could face up to 7 years in prison.

Judge Amanda Woodcock said a psychiatric report on Law had to be take into account before a sentence could be handed down.

Erwiana, who arrived in Hong Kong in 2013, returned to Indonesia in January last year where doctors said burns on her body were caused by boiling water.

Hong Kong has about 300,000 foreign domestic helpers, most of them from the Philippines and Indonesia.

A Hong Kong couple was jailed in 2013 for torturing their Indonesian maid, who said they once dressed her in a nappy and tied her to a chair for five days while they went on holiday.

Time magazine last year named Erwiana as one of its 100 Most Influential People.