Heavy downpours may bring fresh misery to a Chinese town devastated by a landslide. 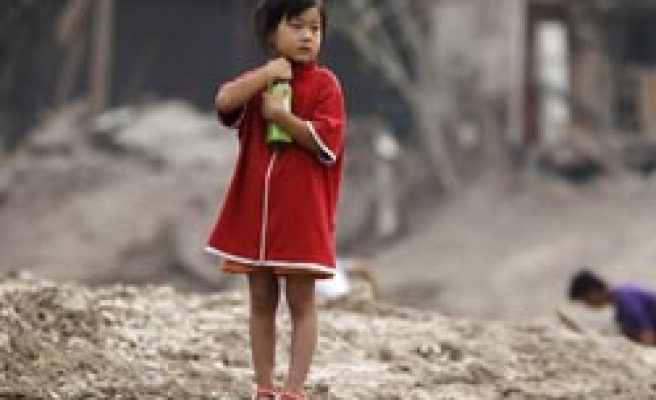 Heavy downpours may bring fresh misery on Wednesday to a Chinese town devastated by a landslide, swelling an unstable lake trapped behind a barrier of mud and debris and hindering the search for bodies.

There is little hope of finding more survivors in the remains of the valley town of Zhouqu, where 702 people are confirmed to have died when an avalanche of rocks and dirt roared down the slopes at the weekend. Another 1,042 are missing.

"We have come to make sure the children receive a proper funeral," said Dorje, a Tibetan with only one name, looking for the bodies of his two nephews.

"We have to find the bodies first," he said, adding that the family was concerned about the expense of a cremation in an area denuded of trees for firewood.

The search and rescue mission in the town has allowed Beijing to showcase its formidable ability to mobilise against natural disasters, including earthquakes and flooding, which have struck China repeatedly in recent years.

More than 10,000 police, troops and firefighters have been sent to the town to aid with the rescue efforts, Premier Wen Jiabao has visited Zhouqu, and top leaders have also chipped in.

But some people are angry at the government over policies they felt left the town vulnerable to landslides.

Officials have warned for years that heavy tree-felling and rapid hydro development were making the mountain area around Zhouqu vulnerable to land slips, government reports show.

"This has happened before. The government knew it could happen again and did nothing to prevent it," said local farmer Yang, who did not want to give his full name.

Shaking with anger, he stood beside a hole in the ground where he had been digging in search of five buried relatives.

The rain forecast for coming days will be a challenge, but security and rescue teams are gearing up. Some 45,000 people have been evacuated and officials warned others to leave or stay away.

"We are expecting very heavy rain for later today, please don't spend too long in town," said a policeman at a checkpoint on the outskirts of Zhouqu, who declined to give his name.

The stench of death was thick after days of fierce sun, and a steady flow of bodies was carried off to makeshift morgues -- little more than roped-off stretches of dirt covered with lime.