Hundreds of Indonesian prisoners break out

"Chaos occurred because the water and electricity were off since 5 a.m., and by 5:30 p.m. the prisoners protested and broke through the main door," Amar said. 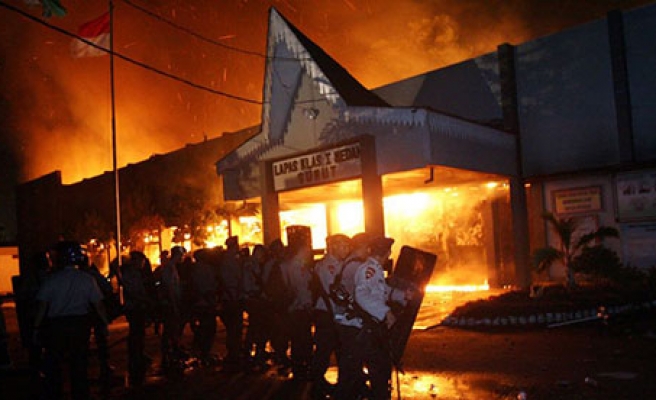 About 200 prisoners escaped from a maximum security prison in Indonesia's fourth-largest city, Medan, late on Thursday after a protest over a lack of water and electricity turned violent, a police spokesman said.

Indonesian police spokesman Boy Rafli Amar said 15 of the 200 prisoners who escaped were believed to be "terrorists".

Those 15 are believed to have links to Toni Togar, who is currently serving a 20-year sentence in a separate prison for a series of church bombings in Sumatra in 2000, the Jakarta Post reported on Friday.

The prisoners fled after a fire broke out inside the prison that killed at least two inmates and two prison officials, another police official said.

Soldiers and police officers in Medan, the capital of North Sumatra, have yet to track down many of the escapees.

"Chaos occurred because the water and electricity were off since 5 a.m., and by 5:30 p.m. the prisoners protested and broke through the main door," Amar said.

The Medan prison held more than 2,500 inmates, the newspaper said, citing Justice Minister Denny Indrayana. That would put the prison population nearly 150 percent above its capacity of 1,054.