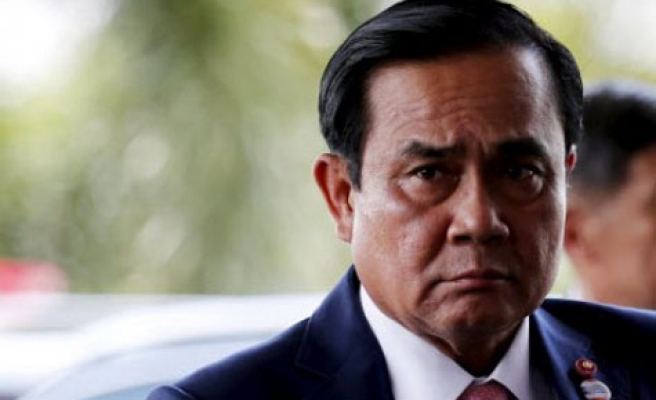 Hundreds of activists defied a ban on protests and marched in Thailand's capital on Saturday in a rare rally against the hard-line ruling military.

Lines of police stood by as a crowds of people chanting "no dictatorship", some carrying anti-junta banners, marched peacefully on Bangkok's Democracy Monument, against the orders of a government widely condemned for using draconian measures to silence detractors.

The protest was to mark the ninth anniversary of a coup against the government of Thaksin Shinawatra that many Thais see as the trigger for an intractable conflict that is showing no signs of abating.

The demonstrators attended a forum at Bangkok's Thammasat University which the government allowed to take place, but permission was denied for their march beyond its walls.

Though the gathering pales in comparison to the mass rallies that have plagued Thailand, protests have been rare since the generals overthrew the government of Yingluck Shinawatra, Thaksin's sister, in a coup in May last year.

The military has been criticised by the West for rounding up hundreds of activists, some for demonstration of just a few people. Many, including journalists and politicians, have been forced to attend "attitude adjustment" sessions at army bases.

"Peoples' rights have been taken away, too many have been detained," said Montra Thongsuksan, a demonstrator carrying a sign saying "return power to the people".

"I have to show solidarity, against the military. I'm scared, but I'm willing to march to show we won't give up."

Thailand has been caught in a dilapidating tug-of-war between supporters of the politically dominant Shinawatra family and a royalist military backed by a network of old-money conservatives whose influence is being challenged.

The military will not cede power soon; Prime Minister Prayuth Chan-ocha, the general who staged the coup said last week an election could take place in July 2017.

The time frame was pushed back about a year after a military-appointed panel on Sept. 6 rejected a draft constitution in a vote many analysts believe the top brass may have influenced to prolong its rule.

There was no uniformed military presence at the rally and police, who estimated 400 attended, made no obvious attempt to stop it.

"If things get out of hand, we'll report it to our superiors."