In Pakistan, waiting on an island for flood relief

Since the floods came, the 30 or so people in the extended family who live here have been cut off, living off their animals and what stocks of food they had. 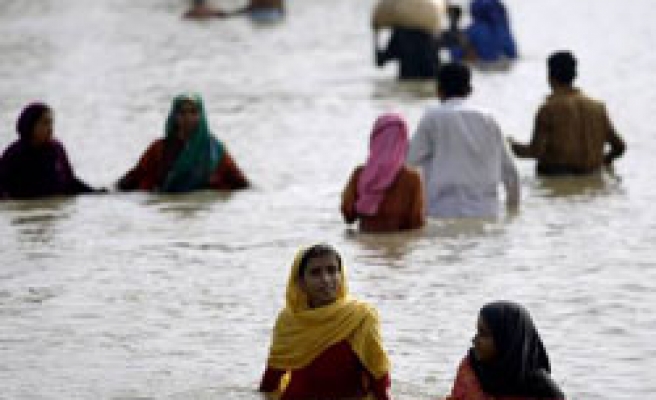 Muzamel is just five days old and sleeps peacefully under a makeshift mosquito net, blissfully unaware that her family home is now an island, still surrounded by water one month after the floods hit.

It is a half-hour journey by army motor boat to reach the village of Kot Bodla, across a giant lake which has submerged the family's livelihood -- its cotton and wheat fields -- below five or six feet of water.

Since the floods came, the 30 or so people in the extended family who live here have been cut off, living off their animals and what stocks of food they had, and crowding into the buildings which were not destroyed or dangerously damaged.

"The water came in the night. It was raining," says Lal Bai, the baby's grandmother. "One by one, houses began to collapse. I was so scared and worried about the children; I thought the water was going to come and wash them away. We moved the children from room to room to save their lives.

Since then, nobody has come to help them.

Here in Rajanpur district of south Punjab, some 700,000 people fled their homes. With many of the people who fled stranded on embankments with nothing, the army says it had to give priority to the homeless.

Lal Bai's daughter gave birth without hope of medical help - a girl who now sleeps tightly bound in a green scarf, three black dots smeared on her forehead to keep away evil spirits.

Her family has little idea what the future holds after such terrible floods -- even in all the stories of their ancestors they had heard of nothing like this.

They know the immediate future will be hard. The cotton was just three weeks away from being picked when the floods hit. They do not expect to be able to sow wheat in the winter. They do not have enough food for their goats, sheep and buffalo.

"The entire day I am sitting idle," complains Lal Bai. "I used to go to my fields and collect fodder for the cattle. Now I am just sitting and watching the water."

Yet in an echo of comments made in villages across the region, the people are thinking about rebuilding and about the practicalities of making it through the winter.

"I'm just worried about the coming wheat season," says 80-year-old Malik Mahmoud. "This flood will have made our land more fertile and I hope we will get bumper crops after that."

"But what about this season? Where will we get wheat for our own use? And how will I buy seed for another season if I have no wheat to sell?"

Those who can make it to semi-dry land stand patiently in long queues behind gaily-painted relief trucks where the army hands out supplies of food.

Others wade through chest-deep water, carrying their goods on their heads. Some villagers have rigged up charpoys -- a traditional wooden bed made of rope -- with empty barrels lashed beneath them to ferry their womenfolk.

In Kot Bodla, many complain; others mutely proffer identity cards to visitors, hoping they might turn out to be officials who can help them.

But people do the same in poor villages across both India and Pakistan when visitors arrive, even when there are no floods. The proffered ID card is a painfully familiar gesture of poverty and of respect for authority.

And beyond the worries about this year's crops, is fatalism.