Anna Hazare, 74, had been in hospital in New Delhi since Sunday, when he ended a protest that forced a government u-turn on corruption legislation. 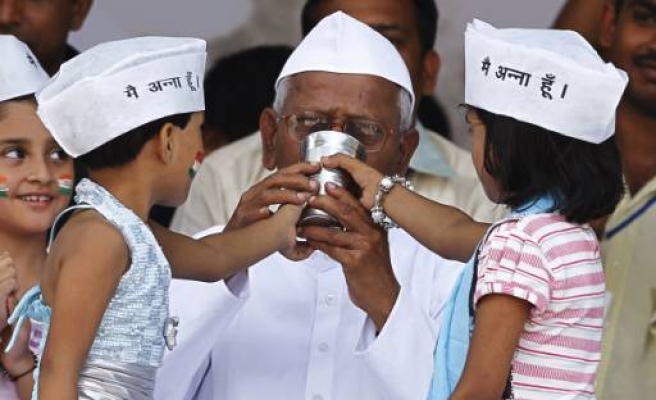 An anti-corruption campaigner, whose near two-week hunger strike against graft made him a national hero in India, left hospital on Wednesday after recovering from his fast and headed home to a rousing welcome.

Anna Hazare, 74, had been in hospital in New Delhi since Sunday, when he ended a protest that forced a government u-turn on corruption legislation.

His stand was supported by millions of predominantly urban middle class Indians, angry at the government's inability to crack down on endemic corruption.

Local media and sources at the hospital said Hazare was allowed to go home after his condition stabilised.

Hazare flew to the western city of Pune on Wednesday evening before travelling to his home village of Ralegan Siddhi, where news of his return sparked celebrations.

Supporters handed out sweets and garlanded his photographs.

Hazare went on hunger strike this month demanding a proposed anti-corruption agency should have the power to investigate the prime minister, judges and civil servants.

After initially arresting Hazare and dismissing him as an anarchist, Prime Minister Manmohan Singh's government backed down and promised to examine his proposals.

Hazare's protest exposed a ruling Congress party riven by a lack of leadership, indecision and poor judgment, opening it up to possible voter anger in key state elections next year.

His action received round-the-clock coverage in India, where about 30 percent of lower house MPs have criminal cases pending against them.

Hazare has threatened to repeat his protest if parliament goes back on its promises.