A spokesman for the students' university says the rumours appeared to have been fabricated as the meat they were cooking had been tested and found to be goat, not beef 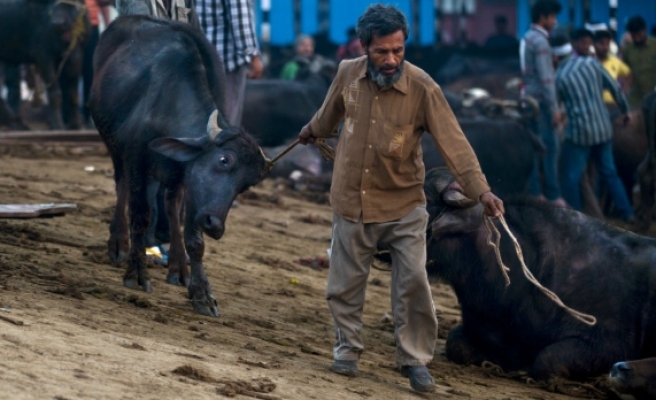 Police in India arrested four Muslim students on charges of breaching the peace after rumours the men were cooking beef sparked protests, an officer said Thursday.

Hundreds of fellow students and right-wing Hindu activists had gathered outside a university residence in the northern state of Rajasthan on Monday and were accusing the four of cooking beef -- a taboo in parts of the Hindu-majority nation.

Many Indian states including Rajasthan have banned the consumption of cow meat, which has become even more contentious since the murder last year of a Muslim man wrongly suspected of eating beef.

Local police officer Labhu Ram said a "tense" crowd had gathered and were demanding the men be arrested, although he denied media reports they had been physically attacked.

"We came to know about the incident and rushed to the campus," he said by phone from Chittorgarh district, where the university is located.

"There was high tension as the angry crowd was demanding their arrest, we seized the suspected material and appealed people to leave the spot."

The arrested students, who were all from Indian-occupied Muslim-majority Kashmir, were granted bail on Wednesday and have since been released.

Ram said the meat they were cooking had been tested and found to be goat, not beef.

A spokesman for the university said the rumours appeared to have been fabricated.

"It was goat meat and some elements tried to make it into a big controversy," Harish Gurnani said.

Critics say beef bans discriminate against Muslims and other religious minorities who rely on the cheap meat for protein.

Last September Mohammad Akhlaq was dragged from his house in northern Uttar Pradesh state and beaten to death by around 100 people over rumours he had eaten beef.

Some critics say the killings point to a rise in religious intolerance under the Hindu nationalist government of Prime Minister Narendra Modi.