India's navy has been rattled in recent months after Chinese submarines docked in Sri Lanka. 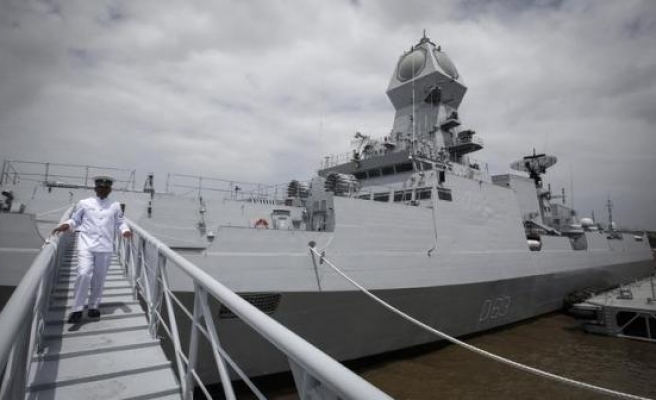 India's government has cleared a $8 billion plan to build the country's most advanced warships, defence sources said, just months after ordering new submarines to close the gap with the Chinese navy in the Indian Ocean.

Since taking over last year, Prime Minister Narendra Modi has signalled his resolve to build a strong military after years of neglect that military planners say has left India unable to fight a two-front war against China and Pakistan.

India's navy has been rattled in recent months after Chinese submarines docked in Sri Lanka, just off its southern coast, underlining the growing reach of the Chinese navy after years of staying closer to its shores.

Modi summoned a meeting of the cabinet committee on security on Monday to approve construction of seven frigates equipped with stealth features to avoid easy detection, a defence ministry source said.

The Times of India said the government had also approved six nuclear-powered submarines for a further $8 billion. The defence source said he had no knowledge of the nuclear submarine programme, which traditionally has been kept under wraps.

The frigates in a programme called Project-17A will be built at government shipyards in Mumbai and Kolkata, in a boost for Modi's Make in India campaign to build a domestic defence industrial base and reduce dependence on expensive imports that have made India the world's biggest arms market.

"Project 17-A was awaiting cabinet clearance since 2012," the source said, adding the Modi government was moving quickly on a project seen as of critical national importance.

The source said the government expects to sign a contract with the shipyards within the month. Another source in the navy confirmed the cabinet clearance but said it would take a decade or even longer for all the ships to be built, even if the shipyards were to start construction immediately.

China's naval forays in the Indian Ocean have exposed the Indian navy's weak undersea defences, which are down to 13 ageing diesel-electric submarines after a string of accidents including one in 2013 in which 18 sailors were killed.

In October, Modi's administration approved fast-tracking the tender process to build six submarines in collaboration with a foreign builder.

"This government is showing signs of urgency, but there is a lot of ground to be covered," said former vice admiral Arun Kumar Singh. "All our programmes are running way behind schedule and with a huge amount of cost over-runs."